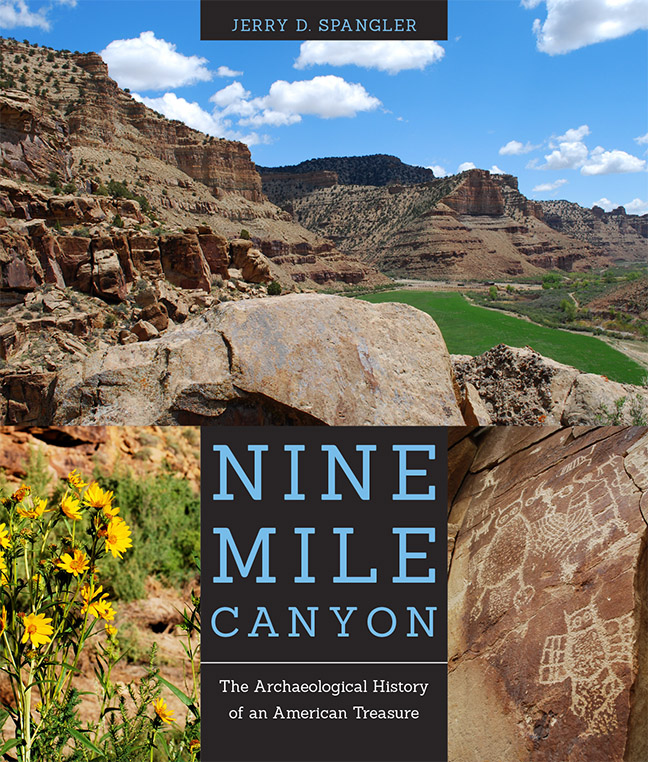 With an estimated 10,000 ancient rock art sites, Nine Mile Canyon has long captivated people the world over. The 45-mile-long canyon, dubbed the “World’s Longest Art Gallery,” hosts what is believed to be the largest concentration of rock art in North America. But rock art is only part of the amazing archaeological fabric that scholars have been struggling to explain for more than a century. Jerry D. Spangler takes the reader on a journey into Nine Mile Canyon through the eyes of the generations of archaeologists who have gone there only to leave bewildered by what it all means.

The early visitors in the 1890s were determined to recover collections for museums but never much cared to understand the people who left the artifacts. Then came a cadre of young scientists—the first to be trained specifically in archaeology—who found Nine Mile Canyon to be an intriguing laboratory that yielded more questions than answers. Scholars such as Noel Morss, Donald Scott, Julian Steward, John Gillin, and John Otis Brew all left their boot prints there.

Today, archaeological research is experiencing another renaissance—a new generation of university-trained archaeologists is determined to unravel the mystery of Nine Mile Canyon using scientific tools and techniques that were unavailable to past generations. Through the words and thoughts of the archaeologists, as well as the more than 150 photos, readers will come to see Nine Mile Canyon as an American treasure unlike any other. As the first book that is devoted exclusively to the archaeology of this unique place, Nine Mile Canyon will evoke fascination among scholars and the general public alike.

Winner of a Choice Outstanding Academic Title award.
Jerry D. Spangler is a professional archaeologist who has spent more than two decades researching the history and prehistory of Nine Mile Canyon. He is director of the Colorado Plateau Archaeological Alliance, a non-profit organization that works closely with government, industry, and conservation groups to further the protection of our cultural past to ensure they remain treasures for future generations. With his wife Donna, he published Horned Snakes and Axle Grease: A Roadside Guide to the Archaeology, History and Rock Art of Nine Mile Canyon and Treasures of the Tavaputs: The Archaeology of Desolation Canyon.
Table of Contents:
List of Figures
Introduction
1. John Wesley Powell and the Conundrum of the Name Nine Mile Canyon
2. Artifacts, Exhibits and Utah’s First Archaeologists
3. Defining the Fremont Culture with Noel Morss, Harvard University and the Claflin Emerson Expedition
4. On the Fringe of Science with Albert Reagan and the Para-archaeologists
5. John Gillin and the University of Utah Investigations at Sky House, Valley Village and Warrior Ridge
6. Rock Art, Settlement Patterns and a Broader Understanding of Nine Mile Canyon
7. Current Perspectives on the Prehistory of Nine Mile Canyon
Appendix
References Cited
Index

Praise and Reviews:
“Jerry Spangler has clearly established himself over many years as the expert on Nine Mile Canyon cultural history. The research here is superb and the writing clear and engaging.”—James M. Aton, author of John Wesley Powell: His Life and Legacy (The University of Utah Press, 2010)
“The scholarship is sound, very sound. Jerry’s research is always thorough and always revealing, as he finds things others seem to have been unable to locate. His writing is absolutely wonderful. The images he evokes are rich and full, and his characterizations of individuals and their actions and motivations are a delight.”—Kevin T. Jones, author of The Shrinking Jungle (The University of Utah Press, 2012)
"The writing is scholarly in manner but clear and concise, complete with thorough references and indexing. This is the first book that is devoted exclusively to the archaeology of this unique place, and is sure to become a source of information on Nine Mile Canyon for years to come."
—Deseret News