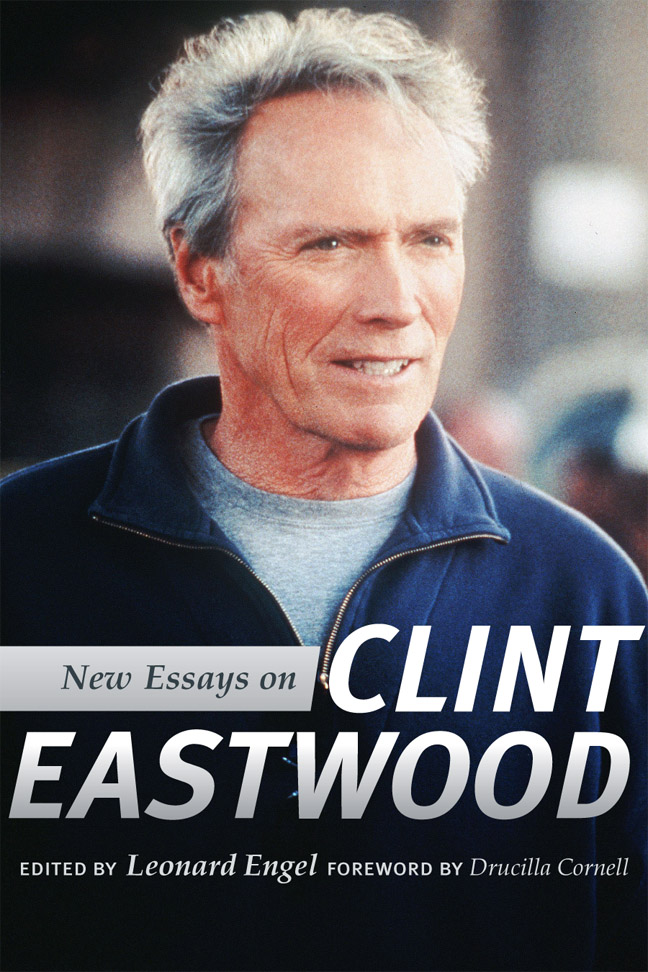 New Essays on Clint Eastwood is a companion to Engel’s previous book, Clint Eastwood, Actor and Director: New Perspectives. It includes discussion of some of Eastwood’s most recent films as well as his earliest work, and deepens our overall appreciation of his artistry and his growth as an ever more accomplished storyteller. The contributors to this new volume examine Eastwood’s body of work as both actor and director: his portrayal of Rowdy Yates in the television series Rawhide, his directorial debut with Play Misty for Me, his directorial and starring role in Gran Torino, and his recent directorial successes with Hereafter and J. Edgar.

A common thread throughout the volume is the respect for Eastwood’s commitment to cinematic storytelling. Indi-vidually and collectively, the essays highlight the variety and complexity of Eastwood’s themes and his accomplish-ments throughout a lifetime of endeavors. Examining his Westerns and detective films illustrates how Eastwood left his iconic stamp on those genres, while discussion of his more recent films expounds on his use of family, history, and myth to transcend generic conventions and to project a hard-won vision of a united humanity beyond the separation of ethnic, racial, and national conflicts. Cumulatively, the essays remind us of his lifelong devotion to perfecting his artistry and his powers as a storyteller.
Leonard Engel is a professor of English at Quinnipiac University. He has published a number of cinematic critiques, and he is editor of The Big Empty: Essays on the Land as Narrative; Sam Peckinpah’s West: New Perspectives (The University of Utah Press, 2003); Clint Eastwood, Actor and Director: New Perspectives (The University of Utah Press, 2007); and A Violent Conscience: Essays on the Fiction of James Lee Burke.
Table of Contents:
Foreword by Drucilla Cornell
Acknowledgments
Introduction
1. “Landscape as Moral Destiny”: Mythic Reinvention from Rowdy Yates to the Stranger - Robert Smart
2. Thoroughly Modern Eastwood: Male/Female Power Relations in The Beguiled and Play Misty for Me - Brett Westbrook
3. Clintus and Siegelini: “We've Got a System. Not Much, but We're Fond of It." - Mike Smrtic and Matt Wanat
4. Rawhide to Pale Rider: The Maturation of Clint Eastwood - Edward Rielly
5. Eastwood's Treatment of the Life of Creativity and Performance in Bronco Billy, Honkytonk Man, White Hunter Black Heart, and Bird - Dennis Rothermel
6. “You Can’t Hunt Alone”: White Hunter Black Heart - Richard Hutson
7. The End of History and America First: How the 1990s Revitalized Clint Eastwood - Craig Rinne
8. A Man of Notoriously Vicious and Intemperate Disposition: Western Noir and the Tenderfoot’s Revenge in Unforgiven - Stanley Orr
9. A Good Vintage or Damaged Goods?: Clint Eastwood and Aging in Hollywood Film - Philippa Gates
10. Space, Pace, and Southern Gentility in Midnight in the Garden of Good and Evil - Brad Klypchak
11. Mystic River as a Tragic Action - Robert Merrill and John L. Simons
12. Lies of Our Fathers: Mythology and Artifice in Eastwood’s Cinema - William Beard
13. Eastwood’s Flags of Our Fathers and Letters from Iwo Jima: The Silence of Heroes and the Voice of History - John M. Gourlie
14. Gran Torino: Showdown in Detroit, Shrimp Cowboys, and A New Mythology - John M. Gourlie and Leonard Engel
15. Invictus: The Master Craftsman as Hagiographer - Raymond Foery
16. Hereafter: Dreaming beyond Our Philosophies - John M. Gourlie
17. Postscript, “Citizen Hoover: Clint Eastwood’s J. Edgar” - Richard Hutson and Kathleen Moran
Filmography
Contributors
Index
Praise and Reviews:
“In this rich collection, we find almost all of Eastwood’s major movies reviewed, with excellent critical analysis and care for Eastwood’s cinematic rejection of simplistic closure. The director does not attempt to give us an ultimate vision that leaves no place for the imagination of the audience: the very opposite is the case. The texts in this volume address the richness of Eastwood in his extraordinary work, not only as a director, but also as an actor, and give rightful acknowledgment to his place of honor in the cinema of the United States.”—from the foreword by Drucilla Cornell