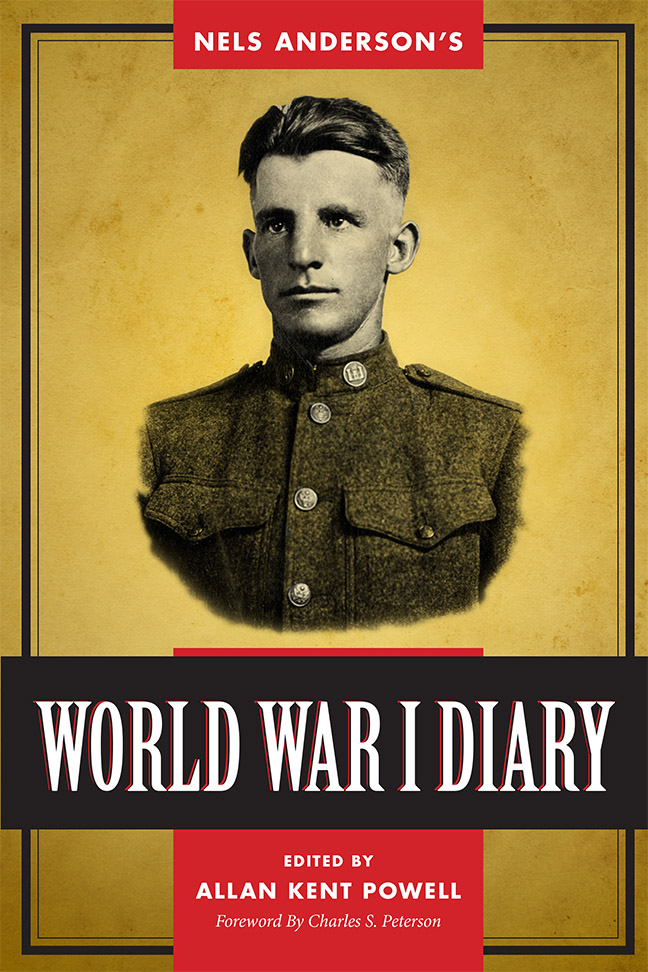 Nels Anderson’s World War I Diary provides a rare glimpse into the wartime experiences of one of the most well-respected sociologists of the twentieth century, the renowned author of The Hobo (1920) and Desert Saints: The Mormon Frontier in Utah (1942). Anderson, a keen observer of people, places, and events his entire life, joined the U.S. Army in 1918 at the age of 29 and was sent to Europe to fight as part of the Allied Expeditionary Force (AEF) under General Pershing. Because keeping a journal was strongly discouraged among American forces during WWI, particularly among the rank-and-file soldiers, Anderson’s diary stands as a rare gem. Furthermore, it is the only known account of war service during WWI by a member of the LDS Church. Anderson joined the Mormon faith after accepting the hospitality of an extended Mormon ranching family during his travels throughout the American West as a working hobo.

Anderson’s accounts of the St. Mihiel and Meuse-Argonne offensives are particularly remarkable given the challenges of keeping a detailed journal amidst the chaos and suffering of the war’s Western Front. His insights into the depravity and callousness of war are buttressed with intimate human portraits of those to whom he was closest. The war years provided many formative experiences that would prove to have a lasting influence on Anderson’s views regarding the working poor, authority, and human values; this would come to bear heavily on his later work as a pioneering sociologist at the University of Chicago, where he helped establish participant observation as a research method. The many introspective entries contained in this volume will be of  reat interest to military historians and history buffs as well as to those in the social sciences looking to find the intellectual origins of Anderson’s later work in the burgeoning field of sociology.

Allan Kent Powell is senior state historian at the Utah State Historical Society and managing editor of the Utah Historical Quarterly. He is the author of Splinters of a Nation: German Prisoners of War in Utah and numerous other works.

Praise and Reviews:
“Intrinsically valuable. The quality of Nels Anderson’s writing is remarkable. He was an enlisted man with an unusual level of education and that shows on almost every page of his narrative. As editor, Powell has earned high marks for research, organization, and extensive annotations.”—Larry Ping, author of Gustav Freytag and the Prussian Gospel

“A timely and engaging firsthand account of America’s involvement in ‘the war to end all wars.’ ...The diary provides readers with a genuine sense of ‘being there’ as Anderson matter-of-factly shares what military life in and near the frontline trenches was like.”—BYU Studies Quarterly

“If you’re interested in the thoughts, feelings, and observations of an educated soldier, one who takes his own writing seriously, I know you’ll enjoy reading both the diary and its supplements.”—The Journal of Mormon History