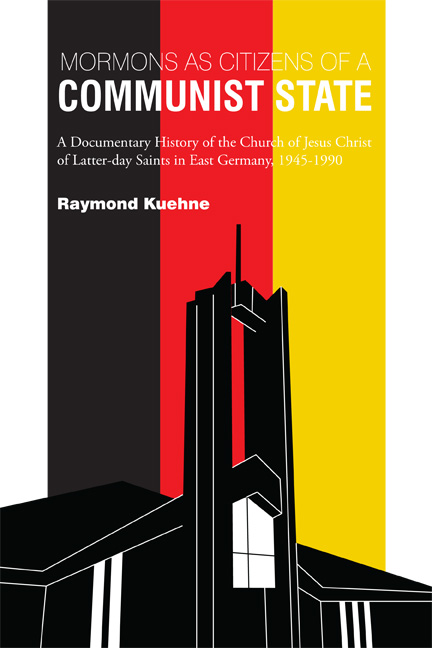 From 1945 to 1990 communist East Germany was an officially atheistic state.  Nevertheless, members of the Church of Jesus Christ of Latter-day Saints practiced their religion there.  Mormons as Citizens of a Communist State is based on primary sources---government and church documents, interviews, and private leters ---to create a documentary history of the church during that historical period.

The history of church-state relations begins with attempts to terminate the church's legal status in the early 1950s, continues with the building of the Freiberg Temple from 1983 to 1985 (the only LDS temple ever built in a communist state), and concludes with the historic meeting in 1988 between current LDS Church President Tomas S. Monson and Chairman Erich Honecker that permitted the entry of LDS missionaries from the West.

The relationship between the Latter-day Saint citizens and their atheistic government is a major theme of this book.  Did church members manage to be true to their faith and simultaneously function as citizens within that state, and if so, how did they achieve that balance?

Mormons as Citizens of a Communist State was originally published in German in 2008 by Leipzig University Press.

Raymond M. Kuehne was born in New York City of German immigrant parents and has studied as a Fulbright Fellow at the University of Marburg and as a National Woodrow Wilson Fellow at the University of Virginia. He served in the North German Mission and the Freiberg Temple Mission. Mormons as Citizens of a Communist State was originally published in German in February of 2008.
Table of Contents:

“Kuehne has written the book for an impartial, curious reader who wishes to form his own opinion about what took place with the members of this little religious organization in the GDR. This approach distinguishes itself favorably from so many other accounts and biographies of the history of churches and religious organizations in the GDR. This exciting book should not only be read, it should be studied.”—Joachim Heise, Institute for Comparative State-Church Research, Berlin

"Kudos to the University of Utah Press for publishing this excellent treasure trove of essential information about on of the most remarkable chapters not only of Mormon history but of world history!"—The Journal of Mormon History

"For those who have knowledge of and interest in the history of East Germany, as well as those interested in the worldwide growth of the Church, this book is invaluable....Rather than interpret or answer his own questions, Kuehne leaves that task to the reader, further underscoring the strength of the book."
—BYU Studies