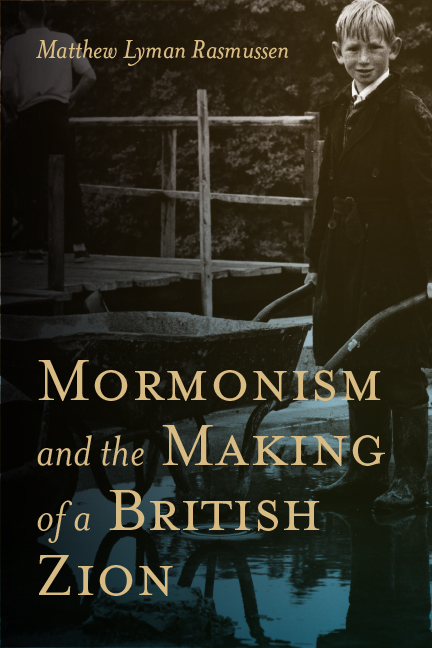 Mormonism in Britain began in the late 1830s with the arrival of American missionaries from the Church of Jesus Christ of Latter-day Saints. Not long afterward, thousands of British converts emigrated to Utah and became a kind of lifeblood for the early Mormon Church. The English North West, where Mormonism had its strongest presence, has since become a place of profound significance to the church, both institutionally and internationally. Despite its importance to Mormonism, this history has never been fully explored. Matthew Rasmussen provides the first detailed account and examines how Mormonism has changed and endured in Britain.

After many British believers left for America, church membership in England fell so sharply that the movement in Britain seemed to be on the brink of collapse. Yet British Mormonism gradually resurged and continues today. How did this religious minority flourish when so many nineteenth-century revivalist movements did not? Rasmussen explains Mormonism’s inception, perpetuation, and maturation in Britain in a compelling case study of a “new religious movement” with staying power. From its establishment in 1837 to its maturation in 1998, the Mormon perspective of Britain shifted dramatically. This book chronicles that shift, and illustrates how doctrinal adaptation has enabled Mormonism in Britain to persist.
Matthew Lyman Rasmussen holds a bachelor’s degree in English from the University of Utah and master’s and doctoral degrees in history from Lancaster University in England. He is a past recipient of the Mormon History Association’s best dissertation award. A Utah native, he now lives in Virginia’s Shenandoah Valley with his wife and four children.
Table of Contents:
List of Illustrations
Acknowledgments

1.  “Among These Dark Satanic Mills”: Britain as Babylon
2. The Gathering: Revelation and Adaptation
3. Establishment and Expansion: 1837–1853
4. Consolidation and Decline: 1854–1900
5. Opponents, Apostates, and Dissenters
6. Revivals and Reversals: The Struggle for Stability in the Twentieth
Century
7. A Home for the Saints: Developments in Worship Accommodation
8. “In England’s Green and Pleasant Land”: Britain as Zion

Appendix A: Correspondence: Heber C. Kimball’s Valedictory Address to the Members of the Upper Ribble Valley
Appendix B: Tract: Orson Hyde’s “A Timely Warning to the People of England”
Appendix C: Dedicatory Prayers: Six Examples, 1849–1998
Appendix D: Oral History: The Book of Mormon, Proselytizing, and Conversion
Notes
Bibliography
Index
Praise and Reviews:
“The finest comprehensive study of the LDS Church in an international setting that I have ever read. Beautifully written, very well organized, and superbly well researched, Rasmussen’s study takes the reader on a journey through three distinct phases of Mormonism in the United Kingdom.”
—Richard E. Bennett, author of Mormons on the Missouri—And Should We Die, 1846–1852

“An outstanding LDS history book. I don’t know of any other books like this one. Matthew Rasmussen is a gifted writer.”
—Ronald Watt, author of The Mormon Passage of George D. Watt: First British Convert, Scribe for Zion

"Mormonism and the Making of a British Zion chronicles the LDS Church in Britain in a fresh and detailed way.…A worthwhile read and an enduring tribute to the Saints of Britain.”—Deseret News

“Mormonism and the Making of a British Zion should rightly act as a standard for other aspiring historians seeking to resurrect Mormonism’s international story.”—Association of Mormon Letters

“First, Rasmussen is a gifted writer whose English prose is enviable at least and awe-inspiring at best. As a recipient of a bachelor of arts in English from the University of Utah, he has found his canvas in this book and has utilized his skill as a literary artist. Second, his research methodology is equally inspiring. . . . At every turn, it is clear Rasmussen is bringing to the reader every available resource imaginable to expertly craft his story.”—BYU Studies

“Matthew Rasmussen gives us a good read, incorporating named local individuals and events within the wider dynamics of US church strategy. Non-Mormon readers will learn a great deal about the LDS Church at large in and through this cameo of an unusually ‘sacred space.’”—Neal A. Maxwell Institute for Religious Scholarship, Brigham Young University