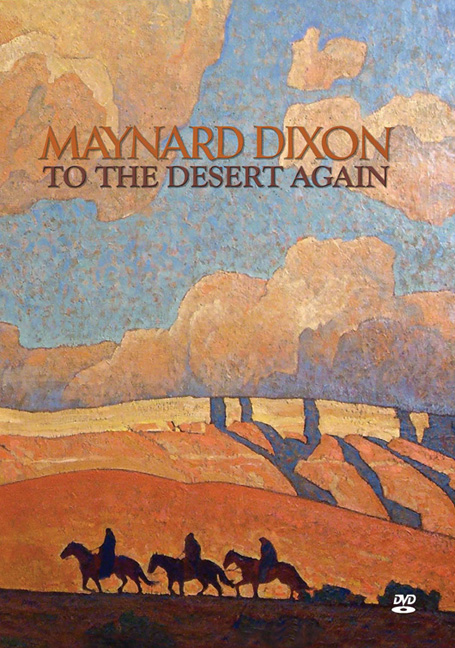 One hundred years ago, a solitary figure roamed the desert seeking to capture the endless sky and towering mesas in paint and poetry. His vision of the West was matchless. Maynard Dixon survived the destruction of San Francisco city by earthquake and fire, the Great Depression and the civilizing of the West. He spent over two decades sketching the West for novels, and then decades more on a quest to find and portray the 'real' West-the vast space, intense silence, and profound spirit of the land and people of the American Desert.

Maynard Dixon: To the Desert Again profiles the life and art of Maynard Dixon (1875-1946), one of the most influential, yet lesser known, western artists of the early 20th century. "No painter has ever quite understood the light, the distances, the aboriginal ghostliness of the American West as well as Maynard Dixon," says Thomas McGuane. "The great mood of his work is solitude, the effect of land and space on people. While his work stands perfectly well on its claim to beauty, it offers a spiritual view of the West, indispensable to anyone who would understand it."

Dixon's long, productive life was, according to producer Nancy Green, in itself a work of art. "From the beginning, Dixon was different: an authentic, iconoclastic, self-created individual," she says. "He refused to join any one school of art; instead, he created his own distinctive style."

Dixon spent months roaming the western mesas, plains and deserts and he created deep friendships with fellow dignitaries like Ansel Adams. Primarily known for his landscape paintings, Dixon was also an outspoken social critic. With his wife Dorothea Lange, the famous Depression-era photographer, he chronicled victims of the Depression and the social unrest of the times. He felt an affinity with Native Americans, creating powerful portraits reflecting their spiritual nature. Art curator Will South, interviewed in the film, notes that "Dixon was a man of the West, not because he painted Western scenes, but because he embraces what the West was and represented: mobility, freedom, possibility and the sense of the infinite." The film also includes interviews with Donald J. Hagarty, author of the definitive Dixon biography; art dealer Paul Bingham, founder of the Thunderbird Foundation, dedicated to the preservation of Maynard Dixon's legacy and his Mt. Carmel, Utah home; and Daniel Dixon, the son of Maynard Dixon and Dorothea Lange.