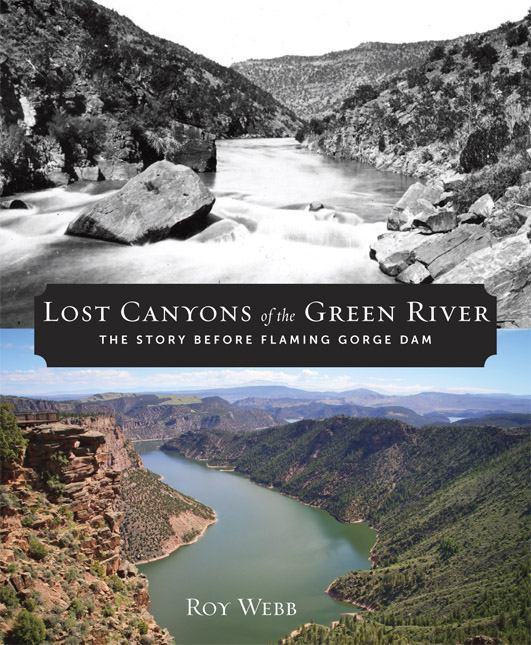 After more than 50 years of plans to dam the Green River, it finally happened in 1963 as part of the Colorado River Storage Project. Today many people enjoy boating and fishing on the resultant Flaming Gorge Reservoir, but few know about what lies under the water. Compared to Glen Canyon, Flaming Gorge has received little attention. In Lost Canyons of the Green River, Roy Webb takes the reader back in time to discover what lay along this section of the Green River before the Flaming Gorge Dam was built, and provides a historical account of this section of the Colorado River system.

A historian and a lifetime lover of rivers, Webb has spent decades exploring the region, digging into archives, and running the length of the Green River. The book chronicles the history that is most closely linked to the river and its bottomlands, sharing the stories of those who traveled the Green through Flaming Gorge and the other canyons now flooded by the reservoir, as well as those who lived, trapped, farmed, or ranched along its banks. In depicting the river of the past, Webb considers his book “a guidebook for a river you can no longer run.”

Finalist for the Utah Book Award in Nonfiction.

Roy Webb is the multimedia archivist for Special Collections at the J. Willard Marriott Library at The University of Utah. He has been running rivers since 1976 and has written scores of publications on river history, including If We Had a Boat: Green River Explorers, Adventurers, and Runners (The University of Utah Press, 1997)

“Roy Webb is one of the premier river historians in the American West. Because the history of the Green River under Flaming Gorge reservoir is the most neglected part of the system, this book is a much-needed addition to the river system’s story. Webb’s easy-to-read writing style will engage both the scholar and the general reader.”—James Aton, author of John Wesley Powell: His Life and Legacy (The University of Utah Press, 2010.)

“An immensely readable, interesting, and informative book… Webb’s narrative covers the history, geology, geography, and other important aspects of the rich and varied back story to what ultimately leads to the building of the dam and its aftermath. We get a valuable glimpse into the lives of the people who inhabited or traversed the territory as well as the physical points along the way. An abundance of photographs and illustrations provides a valuable record of people and places, many of which have now disappeared.”
—Utah Westerners