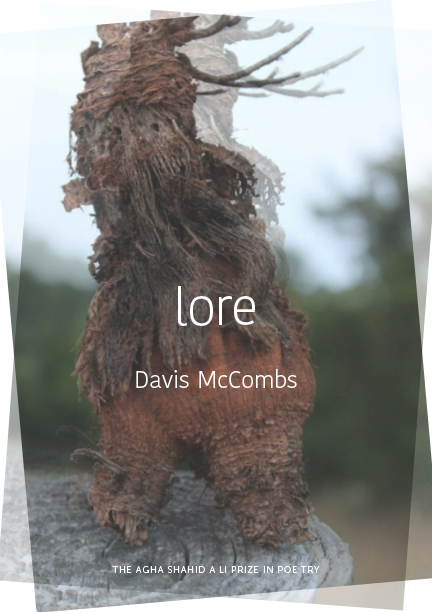 Drawn from the rich folk traditions of his native Mammoth Cave region in Kentucky as well as the folklore of his adopted Ozark Mountains of Arkansas, the poems in Davis McCombs’s third collection exist along the fraught lines where nature and agriculture collide or in those charged moments where modernity intrudes on an archaic world. These poems celebrate out-of-the-way places, the lore of plants, wild animals and their unknowable lives, and nearly forgotten ways of being and talking and doing. Rendered in a language of great lexical juxtapositions, here are days of soil and labor, nights lit only by firelight, and the beings, possibly not of this world, lured like moths to its flames. McCombs, always a poet of place and of rootedness, writes poems teetering between two locales, one familiar but achingly distant, one bewildering but alluringly present.
Davis McCombs is the author of two previous collections of poetry. His first book, Ultima Thule, was chosen by W. S. Merwin as the winner of the 1999 Yale Series of Younger Poets. It was also selected as one of five finalists for the National Book Critics Circle Award. His second book, Dismal Rock (Tupelo Press), was awarded the Dorset Prize, the Eric Hoffer Award, and the Kentucky Literary Award. McCombs directs the Program in Creative Writing and Translation at the University of Arkansas.
Praise and Reviews:
“Its setting is the Ozarks: scrub, fescue, gravel dust, dumpsters, no one’s ‘pastoral dream,’ especially in winter.  And yet, as Davis McCombs writes, ‘There’s/ something here, isn’t there?/ This slope, these old erosions — / something that isn’t a remnant/ of anything. . .’ In thirty-eight haunting poems, McCombs offers that something to us—a wholeness attained not only through the stories and traditions of a culture but through the fusion of poet and place, poet and past. Here are the caves and petroglyphs, the widows and children and workers, the animals of legend and the animals of the fields. Unwavering precision is a hallmark of McCombs’s lore, descriptive, figurative, tonal, emotional: all of poetry’s rooms are lit by his lyric accuracy. ‘To live in the Ozarks,’ he writes, ‘is to wait until/ the sockets in the bark cry out for eyes./ It is to be ready. Will you set a gourd bowl/ brimming shadow at the edge of the coals?’ That is precisely what Davis McCombs has done—set before us a stunning book, brimming shadow, lit by a steady light.”
—Linda Bierds, author of Roget’s Illusion