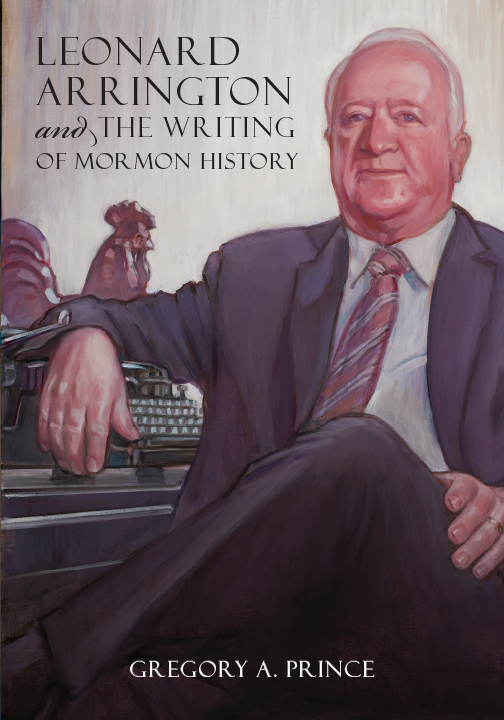 Leonard Arrington is considered by many the foremost twentieth-century historian of Mormonism. He played a key role in establishing the Western History Association and the Mormon History Association, and more than a half-century after its publication, his revised doctoral dissertation, Great Basin Kingdom: An Economic History of the Latter-day Saints 1830-1900, remains a standard. But Arrington’s career was not without controversy. Gregory Prince takes an in-depth look at this respected historian and, in telling Arrington’s story, gives readers insight into the workings of the LDS Church in the late twentieth century.

In 1972, during a major reorganization of the LDS Church, Arrington was asked to serve as the official church historian, thereby becoming the first—and thus far the only—professional historian to hold that title. He immediately set out to professionalize the entire Church History Division and open its extensive archives to scholarly researching. While the output of and from that division moved Mormon studies to a new level, the shift of historiography from faith promotion ecclesiastical, to scholarly and professional research and analysis was unacceptable to a handful of powerful senior apostles. In 1980 the History Division was disassembled and moved to Brigham Young University. That led to a shift in the professionalization of the Church History Division and Archives and in Arrington’s career but not to a loss of his broad influence.
This biography is the first to draw upon the remarkable Arrington diaries (over 20,000 pages); it is supplemented by the author’s interviews of more than 100 people who knew or worked with Arrington. The book is of additional significance given continuing battles between the LDS Church and scholars, which frequently gains national attention because of excommunications of prominent intellectuals.

Winner of the Evans Biography Award and the John Whitmer Historical Association's Brim Biography Book Award.
Gregory A. Prince earned doctorate degrees in dentistry (DDS) and pathology (PhD) at UCLA, and then pursued a four-decade career in pediatric infectious disease research. His avocation in history led him to write several dozen articles and book chapters and three books, including Power from on High: The Development of Mormon Priesthood (1995) and the award-winning David O. McKay and the Rise of Modern Mormonism, coauthored with William Robert Wright (University of Utah Press, 2005).
Table of Contents:
Preface
Acknowledgments
Prologue
1. Ancestry: Straight from the Soil
2. A Childhood with Chickens
3. Enchanted by Economics: The University of Idaho
4. Idaho Boy in Graduate School
5. A Woman Named Grace
6. World War II: The Volunteer Nobody Wanted
7. Becoming Dr. Arrington
8. Great Basin Kingdom: Saga of a Saga
9. The Academic Years and the Move to Greener Pastures
10. The Church Historian’s Office
11. A Portrait of Leonard
12. Walking a Spiritual Path
13. Promoting Mormon History: The Pre-Church Historian Years
14. Church Historian: The “Camelot” Years
15. The Bureaucracy
16. Promoting Mormon History:  The Church Historian Years
17. Blessed Damozels
18. First Fruits
19. RLDS: Finding Common Ground with the Cousins
20. Storm Clouds
21. The Revelation
22. Disassembly
23. What Went Wrong?
24. Grace’s Decline
25. Transitions
26. Brigham Young: American Moses
27. Controlling the Story
28. Mark Hofmann
29. The September Six
30. Adventures of a Church Historian
31. Legacy
Epilogue: The Leonard Arrington Papers
Notes
Bibliography
Praise and Reviews:
“Although Leonard Arrington has been a near-deity for more than two generations of Mormon historians, this biography is no hagiography. Rather, Greg Prince has paid Arrington the ultimate compliment of writing the kind of biography that Arrington himself would have done—comprehensive from birth, not just a focus on his years in the spotlight at LDS Church Historian, as unsparingly candid about Arrington's mistakes and weaknesses as about his driving vision, his powerful work ethnic, and his unfailing hospitality to anyone interested in a place at the Mormon history table. This biography breaks your heart a little, stiffens your spine a lot, and makes you fall in love with a man who may be his generation's best human being.”
—Lavina Fielding Anderson, editor, Salt Lake City

"This is a well-written, exceptionally documented biography of arguably the most important figure in twentieth-century Mormon intellectual history. It provides a captivating, highly readable history of Arrington's personal and professional life, almost unmatched in LDS biography. It made me wish I could go back and talk with Leonard again, and deservedly will long be the definitive work on the subject."
—Lester Bush, coeditor of Neither White Nor Black: Mormon Scholars Confront the Race Issue in a Universal Church

"Prince has used new sources to throw light on some little or unknown parts of Mormon history. His scholarship is unmatchable and flawless. This well-researched and well written book should be a required reading for both students and experts of Mormonism."—The Washington Book Review

“A marvelous portrait of the man and his milieu. ... Read Leonard Arrington and the Writing of Mormon History.  It's honest history, clear-eyed, well-documented, and a pleasure to read.”—Association for Mormon Letters

“This is a book that Greg Prince was born to write. As an active Mormon and a keen and critical hierarchy watcher, Prince has a profound understanding of the workings of the Church bureaucracy with which Arrington had to contend with both as a historian and as director of the History Division. An added advantage is that his book is based on unrestricted access for the first time to the immense Arrington papers. It is well worth waiting for.”—Gary Topping for Journal of Mormon History

“The most valuable contribution of Prince’s treatment of Arrington’s life and career is introducing the richness of the documents on which it is based.  More than anything else, Leonard Arrington and the Writing of Mormon History reveals to readers how much there still is to learn about the recent Mormon past.”—Nova Religio