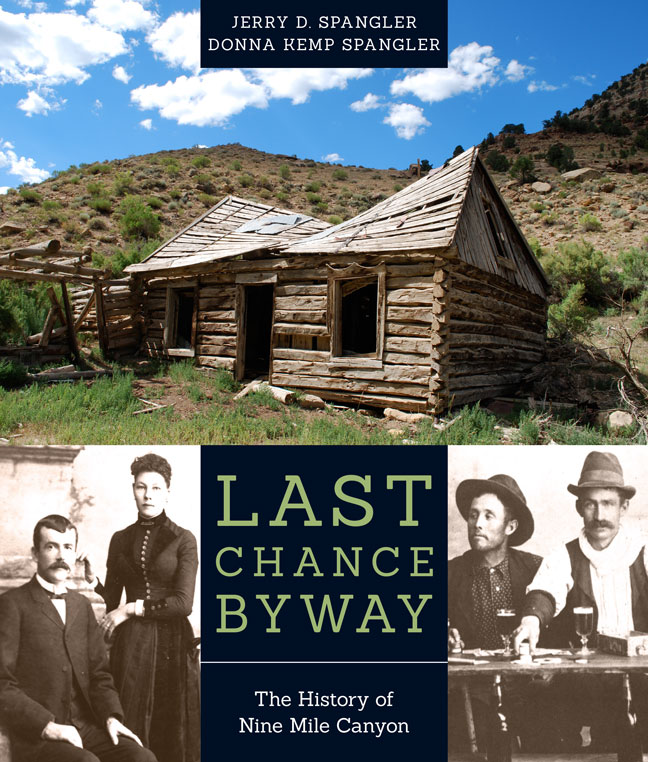 Nine Mile Canyon is famous the world over for its prehistoric art images and remnants of ancient Fremont farmers. But it also teems with Old West history that is salted with iconic figures of the nineteenth and early twentieth centuries. Last Chance Byway lays out this newly told story of human endeavor and folly in a place historians have long ignored.

The history of Nine Mile Canyon is not so much a story of those who lived and died there as it is of those whose came with dreams and left broke and disillusioned, although there were exceptions. Sam Gilson, the irascible U.S. marshal and famed polygamist hunter, became wealthy speculating in a hydrocarbon substance bearing his name, Gilsonite, a form of asphalt. The famed African American Buffalo Soldiers constructed a freight road through the canyon that for a time turned the Nine Mile Road into one of the busiest highways in Utah. Others who left their mark include famed outlaw hunter Joe Bush, infamous bounty hunter Jack Watson, the larger-than-life cattle baron Preston Nutter, and Robert Leroy Parker (known to most as Butch Cassidy).

Winner of the Charles Redd Center Clarence Dixon Taylor Historical Research Award.
Jerry D. Spangler is an archaeologist and a recognized expert on the prehistoric peoples of eastern Utah, and is the executive director of the nonprofit Colorado Plateau Archaeological Alliance, which is dedicated to preserving the past. He is also the author of the award-winning companion volume Nine Mile Canyon: The Archaeological History of an American Treasure.

Donna Kemp Spangler is an award-winning writer, a former journalist, and currently the communications director for the Utah Department of Environmental Quality. Together she and Jerry Spangler published Horned Snakes and Axle Grease: A Roadside Guide to the Archaeology, History and Rock Art of Nine Mile Canyon.
Praise and Reviews:
“A first of its kind, this book clarifies aspects of the folk history surrounding Nine Mile Canyon. The Spanglers have documented and backed up their writing, giving it weight beyond just story, moving the lore into the field of history.”
—H. Bert Jenson, Utah State University
“An original and valuable synthesis that brings together widely separated threads and fills a real need for a longer treatment not only of the area, but of many of the canyon’s fascinating characters.”
—Roy Webb, author of Lost Canyons of the Green River: The Story before Flaming Gorge Dam
"Spangler and Spangler have created a beautifully illustrated and informative history of an overlooked part of Utah, which from the late 1800s to the early 1900s was a thoroughfare from the Green River to the Uinta Basin. The area was home to a variety of people, including members of the military, shopkeepers and trappers. It is evident in the details they relate that Spangler and Spangler were meticulous in their research."—Deseret News