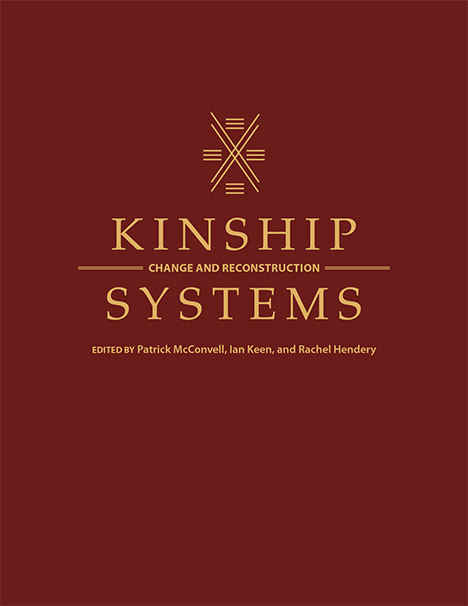 Kinship systems are the glue that holds social groups together. This volume presents a novel approach to understanding the genesis of these systems and how and why they change. The editors bring together experts from the disciplines of anthropology and linguistics to explore kinship in societies around the world and to reconstruct kinship in ancient times. Kinship Systems presents evidence of renewed activity and advances in this field in recent years which will contribute to the current interdisciplinary focus on the evolution of society. While all continents are touched on in this book, there is special emphasis on Australian indigenous societies, which have been a source of fascination in kinship studies.

One key argument in the book is that linguistic evidence for reconstruction of ancient terminologies can provide strong independent evidence to complement anthropologists’ notions of structural kinship transformations and ground them in actual historical and  geographical contexts. There are principles that we all share, no matter what kind of society we live in, and these provide a common “language” for anthropology and linguistics. With this language we can accurately compare how family relations are organized in different societies, as well as how we talk about such relations. Because this concept has often been denied by the trajectories in anthropology over the last few decades, Kinship Systems represents a reassertion of, and advances on, classical kinship theory and methods. Innovations and interdisciplinary methods are described by the originators of the new approaches and other leading regional experts.
Patrick McConvell is a linguist and anthropologist who has carried out research in several areas of Australia. A research fellow at the Australian National University, he is coeditor of Archaeology and Linguistics and author of a number of articles on kinship and kinship change. Together with co-editors Keen and Hendery he has worked on the AustKin project in recent years.

Ian Keen is an anthropologist of Australian indigenous societies at the Australian National University. Author of Knowledge and Secrecy in an Aboriginal Religion and Aboriginal Economy and Society, he is a specialist in kinship and marriage studies.

Rachel Hendery is a post-doctoral fellow at The Australian National University. She is coeditor of Grammatical Change: Theory and Description and author of Relative Clauses in Time and Space: A Case Study in the Methods of Diachronic Typology.
Table of Contents:
List of Figures
List of Tables
1. Introduction: Kinship Change in Anthropology and Linguistics - Patrick McConvell
2. Kinship Terms: Typology and History - David B. Kronenfeld
3. Comparative Phylogenetic Methods and the Study of Pattern and Process in Kinship - Fiona Jordan
4. Reconstructing the Proto-Polynesian Terminology: Kinship Terminologies as Evolving Logical Structures - Dwight Read
5. On Husband-Borrowing: The Linguistic Reconstruction of Ancient Yukatekan Marriage Practices - Eve Danziger
6. Kin Terminologies as Linguistic Imprints of Regional Processes: The Socio-ecological Contexts of Close versus Distant Marriage Patterns in Indigenous Amazonia -  Alf Hornborg
7. The Evolution of the Yolngu and Ngarinyin Kinship Terminologies: Models of Cumulative Transformations - Ian Keen
8. The Reconstruction of Kinship Terminology in the Arandic Languages of Australia - Harold Koch
9. Desertification of an Arandic Dialect - Barry Alpher
10. Proto-Pama-Nyungan Kinship and the AUSTKIN Project: Reconstructing Terms for Proto-Mother’s Father and their Transformations - Patrick McConvell
11. Mama and Papa in Indigenous Australia - Rachel Hendery and Patrick McConvell
12. Comparing Recordings of Warumungu Kinship Systems - Jane Simpson
List of Contributors
Index
Praise and Reviews:
“A much-needed volume in the revival of kinship analysis and of great importance to all that specialize in this field. I was very impressed with the high level of scholarship.”—Bojka Milicic, coeditor of Kinship, Language, and Prehistory: Per Hage and the Renaissance in Kinship Studies (The University of Utah Press, 2010)