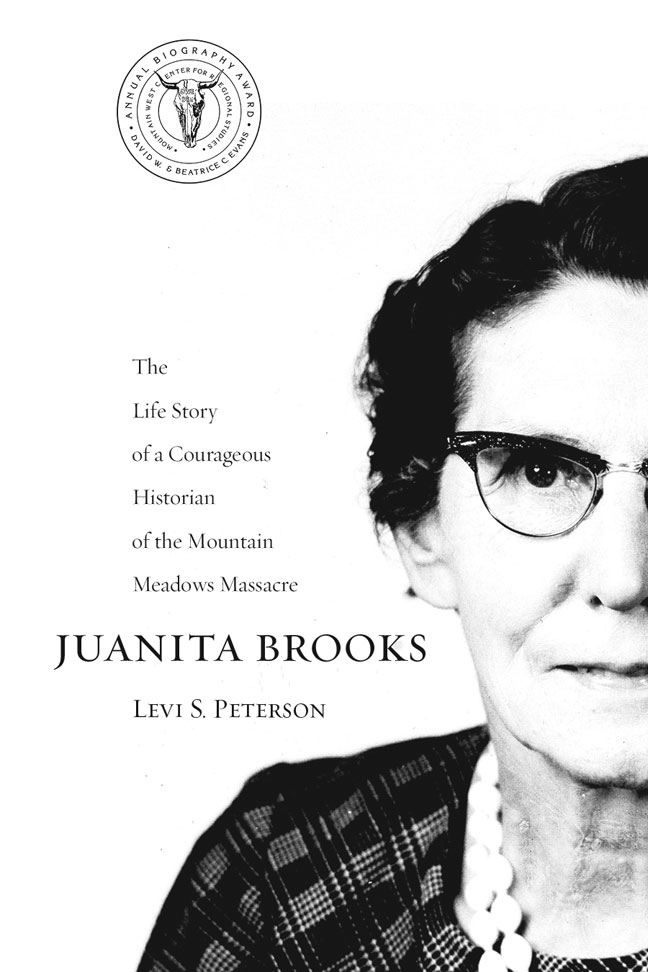 Born in 1898 in Bunkerville, Nevada, Juanita Brooks led an early life similar to that of many who grew up in isolated, tightly knit, rural Mormon communities. An early marriage suggested her future would follow a predictable course, but the death of her husband, the need to raise a young son, and a passion for knowledge led her along a different path, when at mid-life she became a well-known author after publishing The Mountain Meadows Massacre. In this book she exposed the killing of some 100 California-bound emigrants traveling through southern Utah in 1856 as an atrocity carried out by a Mormon militia with Indian allies and not solely as an Indian massacre, as it had been for so long portrayed.

Juanita Brooks was a faithful and active member of the Mormon Church, and her courage to tell the truth about this dark moment in Mormon history established her reputation as a respected historian. While there was no official church condemnation of the book, there was unofficial disapproval and Brooks was shunned by many in her community. She nevertheless doggedly pursued church authorities to revise their stand on the incidents at Mountain Meadows. The desire to tell the truth as she saw it became her hallmark, and Brooks’s life as wife, mother, teacher, community member, and undaunted historian became an uncommon story of personal stamina and intellectual courage.

Levi S. Peterson is a professor emeritus of English at Weber State University in Ogden, Utah. He is the author of collections of short stories, The Canyons of Grace (1982) and Night Soil (1990); two novels, The Backslider (1986) and Aspen Marooney (1995); and the autobiography A Rascal by Nature, A Christian by Yearning (University of Utah Press, 2006).

“Peterson’s book tasted good from first to last, and left me hungering for more. The composite effect...of Juanita Brooks’s life, told in the gentle, controlled prose of a master stylist, is awesome. Peterson’s re-creation of the professional life of a determined and ambitious woman is complete and convincing.”—BYU Studies

“An engaging biography. The author conveys with understanding and empathy a keen sense of Brooks’ personality—particularly in terms of what it was like to be a woman in Mormon country during this period. One of the most important works yet written dealing with twentieth0century developments affecting the Church of Jesus Christ of Latter-day Saints. Of interest of all students of Mormon history and of the American West generally.”
—The Western Library
“Peterson weaves an obviously staggering number of primary sources into a lively narrative which at once portrays an individual and suggests her symbolic role. He captures the contradictory blend of faith and reason, superstition and logic, and conformity and nonconformity which underlie Brooks’, and possibly Utah’s character. Juanita Brooks and the unfolding narrative of Utah History owe a debt to the sensitive and talented Levi Peterson."
—Utah Holiday
“Peterson examines Brooks’ life with uncommon dignity and affection in a prose style stripped of flattery or pretension.”
—Salt Lake Tribune
“Peterson’s book is astounding in its detailed depiction of life and culture in the southern Utah desert, and its description of conflict in the writing of Mormon history. Well written and exhaustively researched, the book contains a complete Brooks bibliography. An important addition to college, university, and public libraries.”
—CHOICE
“[A] richly enthralling, highly readable story of the life of a great woman, a fiercely loving and fearlessly critical maverick riding the edge of the herd as long as body and brain would endure. Honors its subject by emulation, and raises the bar a sizable notch higher for all who will yet write the stories of Mormon lives.”
—The Association for Mormon Letters