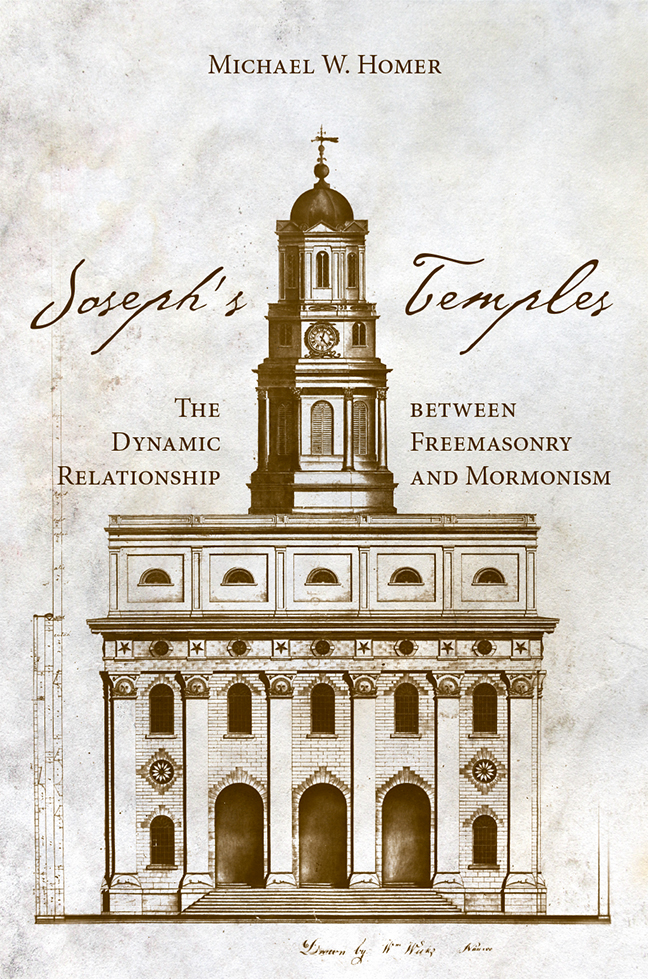 The apparent parallels between Mormon ritual and doctrine and those of Freemasonry have long been recognized. That Joseph Smith, Brigham Young, and other early church leaders were, at least for a time, Masons, is common knowledge. Yet while early historians of the LDS Church openly acknowledged this connection, the question of influence was later dismissed and almost became taboo among faithful church members. Just as Mormons have tried to downplay any ties to Freemasonry, Masons have sought to distance themselves from Mormonism. In Joseph’s Temples, Michael Homer reveals how deeply the currents of Freemasonry and Mormonism entwined in the early nineteenth century. He goes on to lay out the later declining course of relations between the two movements, until a détente in recent years.

There are indications that Freemasonry was a pervasive foundational element in Mormonism and that its rituals and origin legends influenced not just the secret ceremonies of the LDS temples but also such important matters as the organization of the Mormon priesthood, the foundation of the women’s Relief Society, the introduction and concealment of polygamy, and the church’s position on African Americans’ full membership. Freemasonry was also an important facet of Mormons’ relations with broader American society.

The two movements intertwined within a historical context of early American intellectual, social, and religious ferment, which influenced each of them and in varying times and situations placed them either in the current or against the flow of mainstream American culture and politics. Joseph’s Temples provides a comprehensive examination of a dynamic relationship and makes a significant contribution to the history of Mormonism, Freemasonry, and their places in American history.

Recipient of the Meritorious Book Award from the Utah Division of State History
Michael W. Homer practices law in Salt Lake City. He is an award-winning author and has published numerous articles in the fields of law and Mormonism. He is the editor of On the Way to Somewhere Else: European Sojourners in the Mormon West, 1834-1930 (University of Utah Press, 2010).
Table of Contents:
List of Illustrations
Acknowledgments
Introduction

Chronology
Selected Bibliography
Index
Praise and Reviews:
“The significance of Michael Homer’s work cannot be overstated. He has accomplished what no other author has done on this topic. Mormon Studies has been waiting for a work like this.”
—Michael G. Reed, author of Banishing the Cross: The Emergence of a Mormon Taboo

“The definitive treatment by the acknowledged authority in this field—long awaited, and needed since the 1820s. Homer skips the nonsense but not the details in this masterful perspective on the many meanings of Masonry in the Mormon world.”
—Rick Grunder, editor of Mormon Parallels: A Bibliographic Source

“The scholarship is perfect. The thousands of references in the footnotes, the wealth of data offered is often mind boggling: the book’s thesis is buttressed by hundreds of primary sources. Because it is so well written with a clever sense of suspense and progression, the reader has the feeling that he is reading a detective story. Homer’s style is limpid, didactical, and always understandable.”
—Bernadette Rigal-Cellard, author of La Religion des Mormons

“Michael Homer's early articles basically created the new field of the global study of the interactions between Mormonism and Freemasonry. With this book, for many years in the making, we finally have the definitive treatment of this important and controversial issue.”
—Massimo Introvigne, author of Les Mormons

“Takes a topic that has been the subject of endless fantasy and vituperation, and discusses it in a clear, sensible and scholarly way.”—www.patheos.com

“What makes this book particularly excellent is the care Homer takes in drawing together the intellectual and cultural traditions of Mormonism and Freemasonry to explain past and current trends in both organizations….You are missing an important contribution to the field of Mormon history if this book is not on your bookshelf.”—Association of Mormon Letters