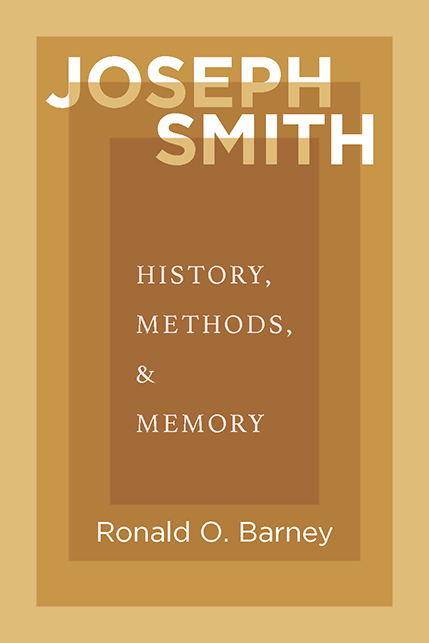 The study of Joseph Smith and his writings have long been shaped by the polemical atmosphere that surrounds Smith’s claims to divine authorship. Even after a half-century of serious scholarship devoted to Smith, fundamental questions remain about how to best interpret features of his life and writing. Smith’s own History of Joseph Smith (edited and revised at the beginning of the twentieth century by B. H. Roberts) created an enduring image that influenced Mormon theology, doctrine, and polity for generations. With new historical documents now available, however, a reappraisal of Smith and the origins of Mormonism is necessary.

Ronald O. Barney, a former editor of the Joseph Smith Papers, applies new interpretations to Smith in history and memory, re-examining both his writings and contemporary accounts of him. The book explores the best methodologies for appraising the historical record, including a review of Smith’s world and its contextual background, an analysis of his foundational experiences, and a characterization of Smith as a man and prophet. Though the premise of re-evaluation may be unsettling to traditionalists, a modern reconsideration of the historical record’s entire range of sources is necessary to fashion a strategy for evaluating Smith and his enduring but complex legacy.Ronald O. Barney served for thirty-four years as an archivist and historian in the History Department of the Church of Jesus Christ of Latter-day Saints. He is a former associate editor of the Joseph Smith Papers and creator and executive producer of the Joseph Smith Papers documentary television series. His books include One Side by Himself: The Life and Times of Lewis Barney and The Mormon Vanguard Brigade of 1847: Norton Jacob’s Record.Table of Contents:
Acknowledgments
Abbreviations and Editorial Method
Introduction
Part I: Methodology
1. A New Era of Joseph Smith Study: Preparing the Ground
2. The Modern Study of Joseph Smith
3. History and Its Methods
4. Memory as History
Part II: Contextual Background
5. The Religious Times of Joseph Smith
6. Joseph Smith among His Contemporaries
Part III: Foundational Experiences
7. Joseph Smith’s Declaration: His 1832 History
8. Order of the Priesthood: Restoration
9. Order of the Priesthood: Expansion
10. Order of the Priesthood: Organization
Part IV: Joseph Smith as a Man and Prophet
11. Underlying the Personality of Joseph Smith: Its Influence on His History
12. Underlying the Character of Joseph Smith
13. Underlying What Joseph Smith Thought and Taught
14. A Course of Revelation: Line upon Line, Precept upon Precept
15. Prophet, Seer, and Revelator
Epilogue
Select Bibliography
Index
Praise and Reviews:“There is so much I enjoyed about this work. My copy has dozens  of dog-eared pages that I have marked with enthusiastic notes. This will be an indispensable volume for the next generations of graduate students and scholars.”
—Christopher James Blythe, faculty research associate, Neal A. Maxwell Institute for Religious Scholarship, Brigham Young University
“This book was a breath of fresh air, and will probably help craft better histories about Joseph Smith going forward.”
—Association for Mormon Letters
“This definitely is not just another volume on the Latter-day Saint prophet Joseph Smith, but a concise, meticulous reconsideration of an ordinary man who was fated to become a seer, prophet, and founder of a world religion. It is a masterpiece that rests on enormous research and a complex understanding of Joseph Smith not only as a man of the nineteenth century and the founding prophet of Mormonism, but also as integral to the nineteenth-century cultural, political, and religious history of the United States. This is a book long overdue.”
—Nova Religio