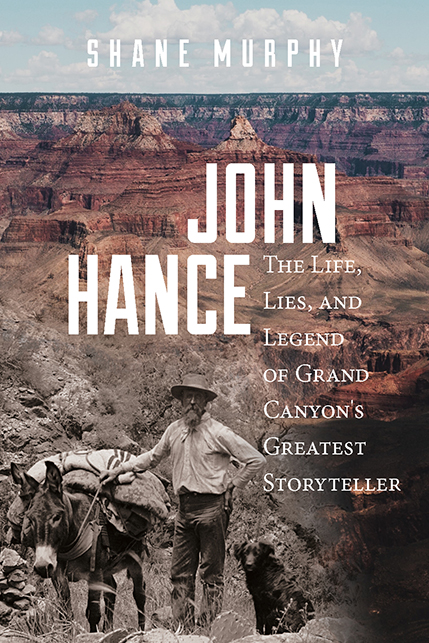 A legend in his own lifetime, John Hance (1837–1919) was synonymous with early Grand Canyon tourism. Between the late 1880s and early 1900s, to say “John Hance” was to say “Grand Canyon.” Hance was well known to travelers and visiting dignitaries alike, men such as William “Buffalo Bill” Cody and Theodore Roosevelt, the president who affectionately referred to him as “the greatest liar on earth.” It was said that Hance tried to jump the canyon on his horse Darby only to turn back when he was halfway over and realized he would never make it across.

The truth behind Hance’s life is remarkable even without embellishment. In this book, Shane Murphy chronicles Hance’s childhood in Tennessee and Missouri, his service in the Confederacy during the Civil War, his time in Union prisons as a POW, and his later adventures with the Hickok brothers crossing the plains. Settling in Arizona’s fruitful Verde Valley, Hance farmed and filled military contracts before taking up residence as Grand Canyon’s first permanent Euro-American settler, trail builder, guide, and renowned storyteller.

Hance left no correspondence, personal memoirs, or other writings. Only informal portraits from magazines and newspaper accounts remain. Murphy investigated assessors’ rolls, rare mercantile ledgers, and mining claims to create a full and compelling narrative of a man who was once an icon of the American West and should be remembered as the founding father of Grand Canyon tourism.

Shane Murphy led Grand Canyon river trips for twenty years, worked on polar expedition ships for a decade, and has been researching, writing about, and presenting illustrated lectures on early Grand Canyon tourism since 2012.Table of Contents:Acknowledgments
Abbreviations for Archival Sources
1. Introduction: “An Old Acquaintance of Mine”
2. Beginnings: “Chinamen Eating Rice with Their Chopsticks”
3. A Salted Fish: “They Knocked the Wax Out’en Us”
4. Across the Plains: “Water You Could Shake Like a Blanket”
5. Apachería: “Eighty Dollars for Boulders”
6. The Sutler’s Store: “Al Sieber, John Hance, and Mr. McInernay”
7. First Locator: “A Genuine Old- Fashioned Pioneer”
8. Glendale Springs: “Over the Falls at Midnight”
9. Prospector and Miner: “Millions of Tons of Ore in Sight”
10. Sow Belly and Beans: “Ther Gravitation Was Peeterfied”
11. The Greatest Liar on Earth: “It Was Plain as Day How It All Happened”
12. Tempest in a Teapot: “Brant and His Mob Are to Blame”
13. One Man’s Legacy: All Fact and Mostly Fiction
Appendix
Notes
Select Bibliography
Praise and Reviews:“A great addition to the Grand Canyon literature. It fills a large void and offers a good view of a whole era that even many Grand Canyon aficionados know little about. The book combines great scholarship with an enjoyable personality.”
—Don Lago, author of Canyon of Dreams: Stories from Grand Canyon History
“There is no other biography of John Hance, despite his being a seminal character in the pre–national park days of Grand Canyon. This book is a much-needed remedy to that lack of detailed knowledge about an important figure and an important period in the development of one of America’s most iconic national parks.”
—Roy Webb, author of Lost Canyons of the Green River: The Story before Flaming Gorge Dam
“A great book for anyone wanting to know more about John Hance at the Grand Canyon, but also for those who seek to understand how John Hance became the character that he was. There is plenty of detail and an extensive section of notes and bibliography.”
—Boatman’s Quarterly Review