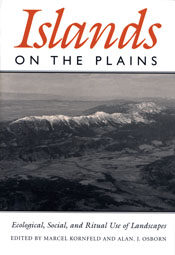 Scattered throughout the Great Plains are many isolated areas of varying size and ecology, quite distinct from the surrounding grasslands. Such spaces can be uplands like the Black Hills, low hills like the Nebraska Sand Hills, or linear areas such as shallow river valleys and deeply incised canyons. While the notion of “islands” is not a new one among ecologists, its application in Plains archaeology is.

The contributors to this volume seek to illustrate the different ways that the spatial, structural, and temporal nature of islands conditioned the behavior and adaptation of past Plains peoples. This as a first step toward a more detailed analysis of habitat variation and its effects on Plains cultural dynamics and evolution. Although the emphasis is on ecology, several chapters also address social and ideological islands in the form of sacred sites and special hunting grounds.

Marcel Kornfeld is a professor of anthropology and director of the George C. Frison Institute of Archaeology and Anthropology at the University of Wyoming. He is the author of seven monographs, most recently On Shelter’s Ledge: Histories, Theories and Methods of Rockshelter Research, and coeditor of the forthcoming volume Hell Gap: A Stratified Paleoindian Campsite at the Edge of the Rockies.