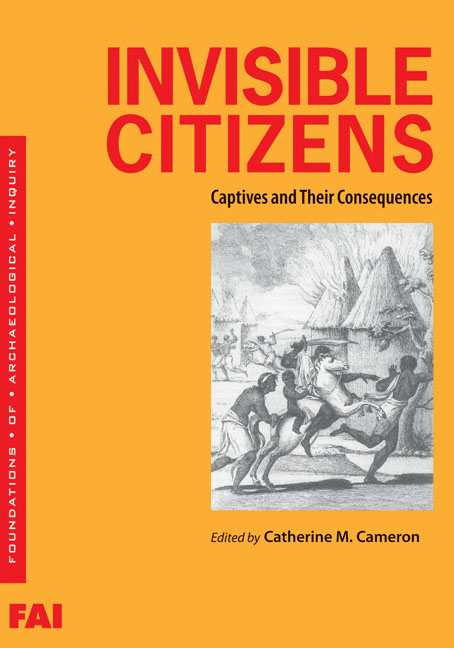 Throughout history, warfare and raiding forced captives from one society into another, forming an almost invisible stratum of many people without kin and largely outside the social systems in which they lived. Invisible Citizens explores the profound effects this mingling of societies and customs had on cultural development around the world.
The contributors to this volume explore the remarkable range in the conditions and experiences of captives, from abject drudge to quasi kinswoman and from war captive to sexual concubine. Developing methods for identifying captives in the archaeological record are established in light of the silence that surrounded captive-taking and enslavement in many parts of the world.
Invisible Citizens promises to attract attention from a number of fields concerned with the comparative, historical study of social inequality. It challenges scholars to develop robust, empirically grounded insights into the practices of slavery while attending to the forms and saliencies of its memories. .
Catherine M. Cameron is an associate professor at the University of Colorado, Boulder and is coeditor of The Journal of Archaeological Method and Theory. Her publications include The Abandonment of Settlements and Regions: Ethnoarchaeological and Archaeological Approaches; Hopi Dwellings: Architectural Change at Orayvi and Chaco and After in the Northern San Juan: Excavations at the Bluff Great House.
Praise and Reviews:

"This book is an important contribution to our understanding of captives and slavery in native societies with special emphasis on how slavery might be recognized in archaeological contexts. Cameron has assembled an excellent collection of papers...Her introductory chapter is an extensive summary of previous work which is essential reading for anyone wanting to investigate the subject in greater depth."—David M. Brugge, The Albuquerque Archaeological Society

"This is anthropology at its best. It is based on the best of scholarship, covering and synthesizing a vast literature while remolding our very framework for understanding slavery and captive-taking."
—Alf Hornborg, professor of human ecology, Lund University, Sweden