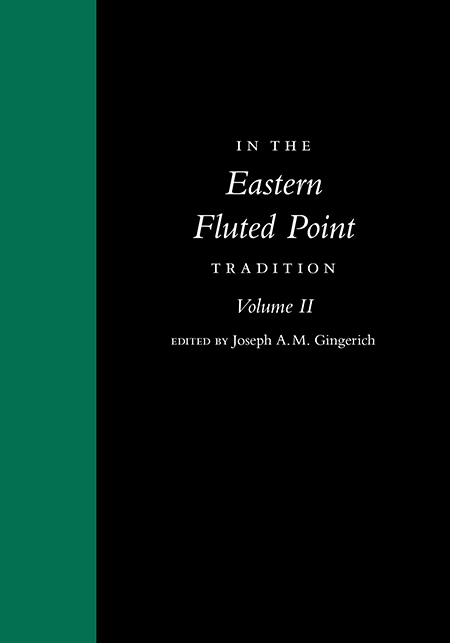 This volume highlights the importance of eastern Paleoindian research in understanding some of the first inhabitants of North America. Although diverse in manufacture and style, fluted point production represents the first widespread cultural phenomenon in North America. Volume II of In the Eastern Fluted Point Tradition continues the work begun in Volume I, expanding the Paleoindian literature with up-to-date summaries of late Pleistocene research in the eastern United States. Twenty-one chapters provide data from additional site reports, regional surveys and syntheses, and artifact studies from areas not previously included. Much of the information in this volume comes from sites that were discovered or excavated only in the last decade. These artifact and site-specific studies serve as examples of the detailed analyses required on Paleoindian assemblages and provide an opportunity to better understand changes in population, technology, and settlement over time. Together, the two volumes advance Paleoindian studies in eastern North America, offering new data, interpretations, and hypotheses to create a baseline for future research.
Joseph A. M. Gingerich is an assistant professor of archaeology at Ohio University and a research associate at the Smithsonian Institution National Museum of Natural History. He is editor of In the Eastern Fluted Point Tradition, volume I.
Table of Contents:
List of Figures
List of Tables
Preface
Introduction

Conclusion
21. Discussion of the Eastern Paleoindian Record – Joseph A. M. Gingerich
References
List of Contributors
Index
Praise and Reviews:
“The volume is a significant contribution; it contains unpublished data, new ideas, and conclusions that challenge some of our cherished notions about late Pleistocene hunter-gatherers in the Eastern Woodlands. As a whole, I think that even those outside the specialty of Paleoindian archaeological research will find it useful.”
—Juliet E. Morrow, University of Arkansas, Anthropology & Geoarcheology

“The volume has a vast amount of outstanding technical content. It is a major and important work of scholarship that will be widely read by professional and avocational archaeologists alike. Like volume I, this will be a basic reference for the next several decades.”
—David G. Anderson, University of Tennessee, Anthropology

“This data-rich volume represents an important contribution to our understanding of Paleoindian settlement-subsistence behaviors, regional chronologies, and the placement of sites relative to particular landforms and salient environmental features. It certainly merits a place in any Paleoindian archaeologist’s library.”
—Midcontinental Journal of Archaeology

“Should prove useful to researchers interested in developing future cross-site comparisons or building and testing regional models of technology, group interaction, and landscape use. This is the major strength of Volume II: it presents―in many cases for the first time―data from both well- and lesser-known fluted point sites in eastern North America in a manner that will provide a foundation upon which to build future studies.”
—Journal of California and Great Basin Archaeology

“This volume—and every chapter within it—considers evidence of social boundaries, fixed territories, flexible and diverse tool kits and manufacturing practices, diverse raw material selection strategies and exchange, and large populations and aggregations. I look forward to the next steps that the data in this volume offer, including broad comparisons between sites drawing on the detailed site-level and artifact analyses presented. Overall, Volume II of In the Eastern Fluted Point Tradition exceeds its goals, and it is a rich resource that will be harvested for years to come.”
—American Antiquity