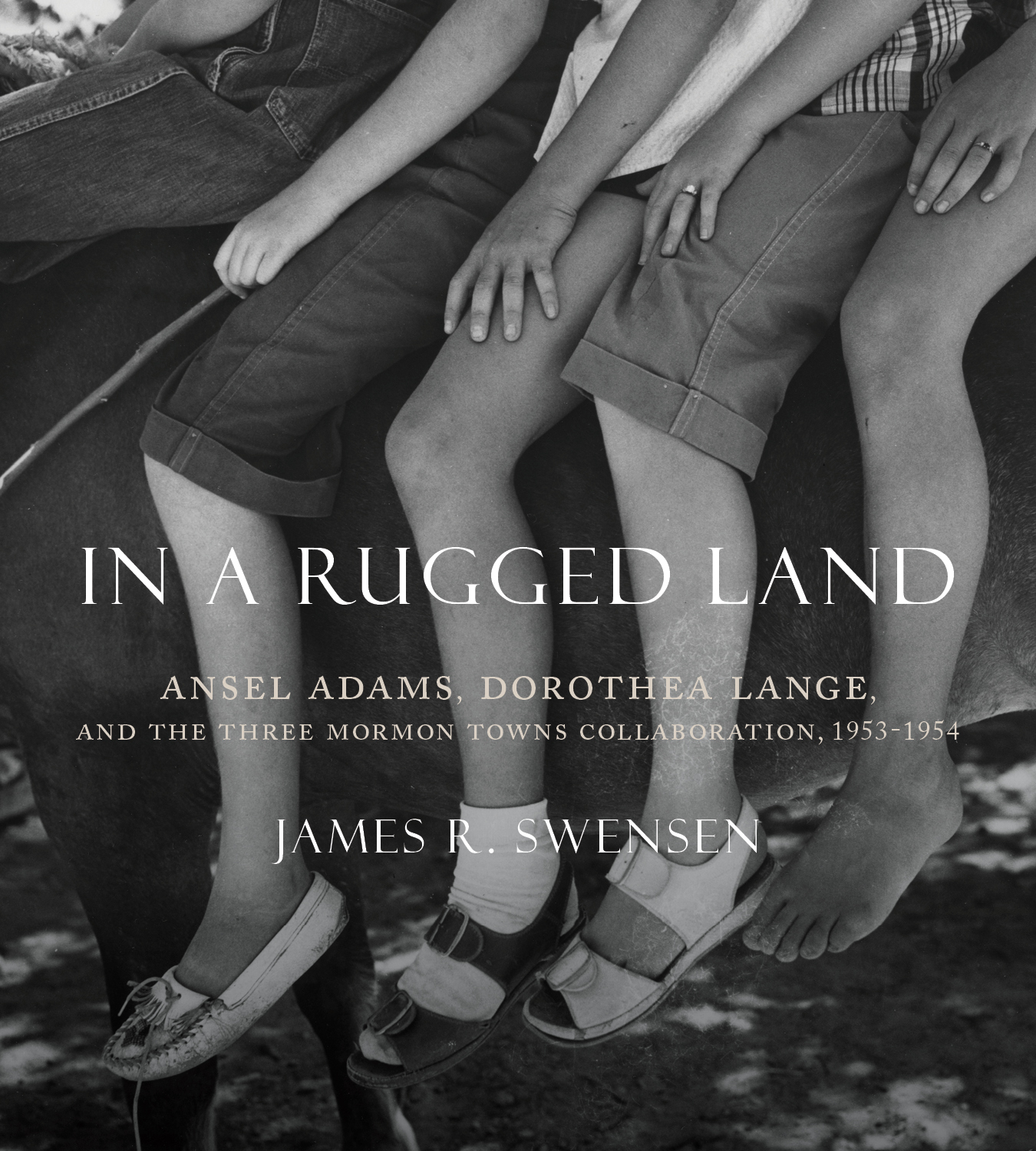 Though photographers Dorothea Lange and Ansel Adams were contemporaries and longtime friends, most of their work portrays contrasting subject matter. Lange’s artistic photodocumentation set a new aesthetic standard for social commentary; Adams lit up nature’s wonders with an unfailing eye and preeminent technical skill. That they joined together to photograph Mormons in Utah in the early 1950s for Life magazine may come as a surprise.

In a Rugged Land examines the history and content of the two photographers’ forgotten collaboration Three Mormon Towns. Looking at Adams’s and Lange’s photographs, extant letters, and personal memories, the book provides a window into an important moment in their careers and seeks to understand why a project that once held such promise ended in disillusionment and is now little more than a footnote in their illustrative biographies. Swensen’s in-depth research and interpretation help make sense of what they did and place them alongside others who were also exploring the particular qualities of the Mormon village at that time.

Interview with Tom Williams at Access Utah
James R. Swensen is an associate professor of art history and the history of photography at Brigham Young University. He is the author of Picturing Migrants: The Grapes of Wrath and New Deal Documentary Photography and the recipient of the 2016–2019 Butler Young Scholar Award from the Charles Redd Center for Western Studies.
Table of Contents:
Acknowledgments
A Note on the Attribution of the Three Mormon Towns
Photographs
Introduction
1. Preparations and Place
2. Working for Life
3. In the Field
4. Gunlock
5. Toquerville
6. St. George
7. Rift
8. Layout
9. The Story
10. The Essence of Things Seen
Notes
Bibliography
Image Credits
Praise and Reviews:
“High-echelon photo-journalism isn't what's thought of in the work of Dorothea Lange and Ansel Adams. Yet the Three Mormon Towns project is that—and more. Two confident veteran photographers in 1954 went in, captured remarkable images, crafted a story for Life, roiled the rural Mormon residents who opened their doors, and stirred a hornet's nest that affected the later work of each artist. James Swensen's study is a wondrous testament to the sometimes fearsome consequence of fieldwork and the costs of collaboration.”
—Paul Starrs, author of Let the Cowboy Ride: Cattle Ranching in the American West
“Although this collaborative project is not well known today, it illuminates a pivotal era in the history of rural Utah and Mormonism and showcases the immense talent of Adams and Lange. Three Mormon Towns deserves to be remembered and commemorated. Thanks to this book it will be.”
—Brian Q. Cannon, coauthor of The Awkward State of Utah
“I am strongly impressed by the depth of Swensen's research and his willingness to interview people he could locate who were living in those towns at the time of the project. This book…deserves to be read for all that it has to say, and show, about life in that corner of Utah, where all three towns are still alive, along with all those not photographed by Lange and Adams.”
—Association for Mormon Letters
“Rich with historical context and insight into how Lange and Adams worked together, Swensen’s book goes beyond a description of the photographic process and a discussion of the subsequent photo-essay. The Brigham Young University professor of art history adeptly weaves a narrative that contextualizes the outsider interest in Mormon communities, the change that photography as a medium and profession was undergoing at the time, and how the publication of the essay was perceived.”
—15 Bytes
“Southern Utah residents and western photo enthusiasts will enjoy this book. Academic readers will be left with an excitement about the topic and the new avenues of inquiry that will surely arise from it.”
—New Mexico Historical Review