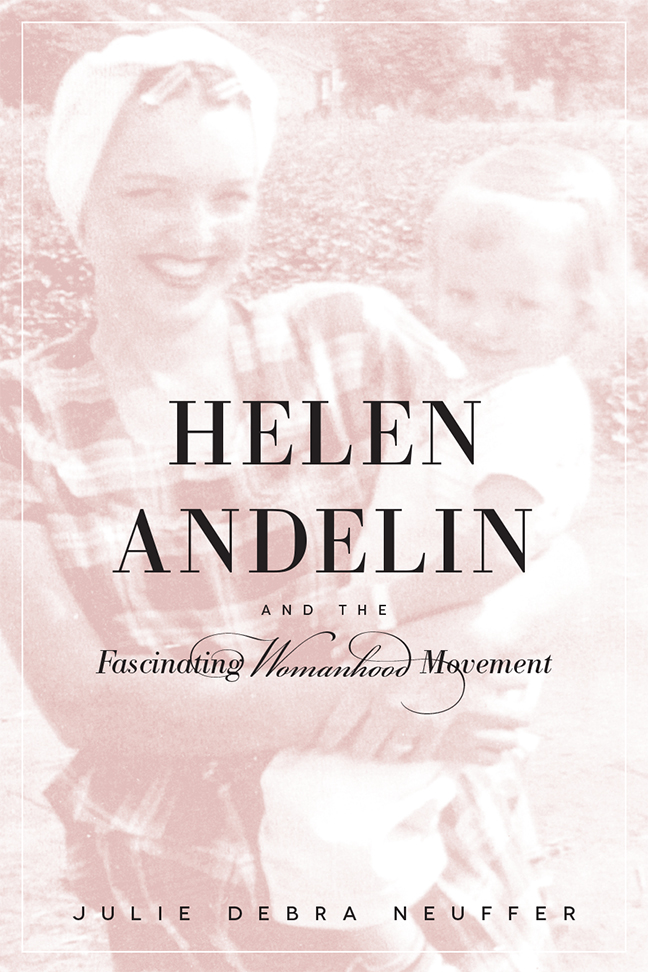 In 1961, Helen Andelin, housewife and mother of eight, languished in a lackluster, twenty-year-old marriage. A religious woman, she fasted and prayed for help. As she studied a set of women’s advice booklets from the 1920s, Andelin had an epiphany that not only changed her life but also affected the lives of millions of American women. She applied the principles from the booklets and found that her disinterested husband became loving and attentive. He bought her gifts and hurried home from work to be with her. Andelin took her new-found happiness as a sign that it was her religious duty to share these principles with other women. She began leading small discussion groups for women at her church. The results were dramatic. In 1963, at the urging of her followers, Andelin wrote and self-published Fascinating Womanhood. The book, which borrowed heavily from those 1920s advice booklets, the Bible, and classical literature, eventually sold over three million copies and launched a nationwide organization of classes and seminars led by thousands of volunteer teachers.

Countering second-wave feminists in the 1960s, Andelin preached family values and urged women not to have careers, but to become good wives, mothers, and homemakers instead. A woman’s true happiness, taught Andelin, could only be realized if she admired, cared for, and obeyed her husband. As Andelin’s notoriety grew, so did the backlash from her critics. Undeterred, she became a national celebrity, who was interviewed extensively and appeared in sold-out speaking engagements.

Andelin’s message calling for the return to traditional roles appealed to many in a time of uncertainty and radical social change. This study provides an evenhanded and important look at a crucial, but often overlooked cross section of American women as they navigated their way through the turbulent decades following the post-war calm of the 1950s.

Winner of the Mormon History Association's Best Biography Award.
Julie Neuffer earned her master’s degree in religious studies from Gonzaga University and her Ph.D. in American history from Washington State University. She currently teaches American history at Eastern Washington University in Cheney, Washington.
Table of Contents:
Preface
Introduction
1. Beginnings
2. The Ideal Woman (From a Man’s Point of View)
3. Everywoman’s Heaven On Earth
4. Heyday
5. Enemies
6. Farmville
Afterword
Notes
Bibliography
Index
Praise and Reviews:
“There is much to be learned in this clearly written, sympathetic account of Helen Andelin’s Fascinating Womanhood. This is a book that reveals that there is another side to women’s history that needs to be explored by scholars.”
—Donald Critchlow, professor, Arizona State University, and author of Phyllis Schlafly and Grassroots Conservatism and When Hollywood Was Right
“Neuffer’s analysis of the various aspects of the Andelin/Friedan conflict and what they reveal about the fragmenting and turbulent women’s movement during the 1970s is outstanding.”
—Lavina Fielding Anderson, editor of Lucy's Book: A Critical Edition of Lucy Mack Smith's Family Memoir
“Exceptionally well researched, impressively written, deftly organized and presented.”—Midwest Book Review
"A timely and insightful book for anyone interested in the continued debates over gender roles.”—Utah Historical Quarterly
“A fine contribution to understanding the place of western women in constructing modern conservatism.”—New Mexico Historical Review
“Accurate, impartial, and unbiased. …Neuffer’s biography gives an unprecedented view of a neglected topic in twentieth-century women’s history, gender studies, women’s studies, and Mormon studies. “—BYU Studies Quarterly