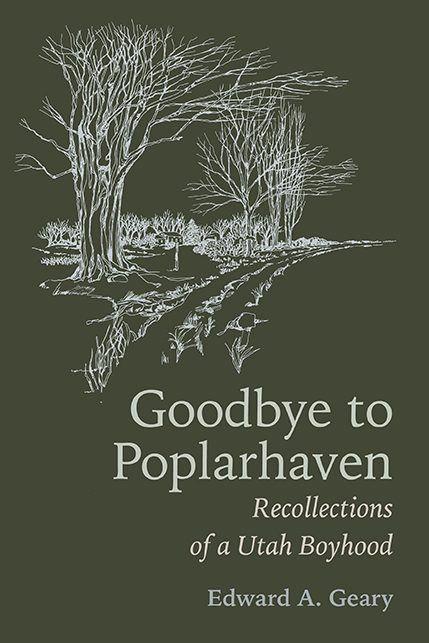 “‘Nothing is nicer,’ Grandpa used to say, ‘than a full barn and a full granary.’ He might have said a full cellar too, for the rows of bottled fruit loomed on the shelves in the dim light, and the aroma of apples filled the nostrils. We could sit down at the dinner table knowing where everything on it had come from, and the process by which it had been prepared. We had before us and around us tangible evidence of the interconnection of things, of tilling, and seedtime, and harvest, of process and product, work and reward. Abundance is what remained when the threshing was done and the mellow Utah autumn slid gradually into winter, abundance in the storehouse for man and beast, evidence that we reap as we have sown. And abundance in the memory which lasts long after the barn and granary are empty hulks, for sometimes we also reap where others have sown.”—from chapter sixteen
Edward A. Geary is an emeritus professor of English and former director of the Charles Redd Center for Western Studies at Brigham Young University. His other publications include The Proper Edge of the Sky: The High Plateau Country of Utah (1992) and A History of Emery County (1996).
Praise and Reviews:
“Geary’s range in these essays is impressive...[and] throughout one notices Geary’s sensitivity—the detail, the quiet voice, the carefully turned phrase.... He tells the truth. You feel as if you’ve just slipped on a pair of comfortable overalls and that you’re walking around town and through the fields with an amicable farm boy who explains things as he goes.”
—Lance Larson in Dialogue: A Journal of Mormon Thought
“Goodbye to Poplarhaven represents one of the best of this genre [memoir] that I have ever encountered. If you want a book that can bring rural Utah of the 1940s and 1950s to sympathetic life, even for someone like myself who grew up in green western region suburbs instead of dry Utah country towns, this is your book. . . .His writing is studded with well-told details, his diction is precise, and his voice is the fluent one of a thoughtful man looking back on the scenes of his growing up with insight and a (sometimes rueful) affection.”
—Jonathan Langford for the Association for Mormon Letters