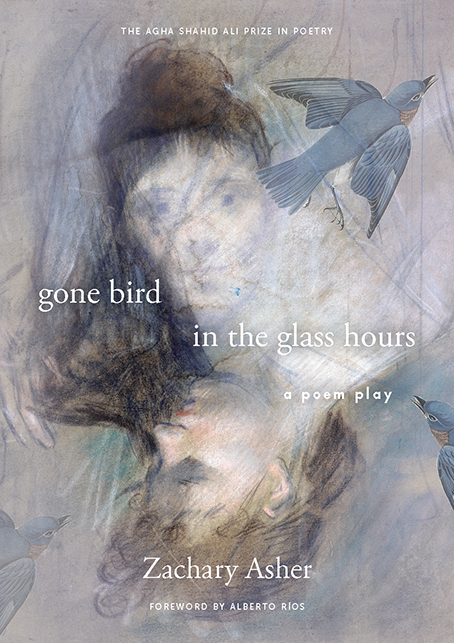 Winner of the 2019 Agha Shahid Ali Prize in Poetry

Zachary Asher’s second collection, gone bird in the glass hours, is a play in verse, featuring seven voices. It begins with a rabbi, bewildered and bent by personal grief, guided and beguiled by elusive Blue Postman into the world of “the glass hours” and its inhabitants.

Rooted in magical realism, gone bird in the glass hours experiments with multiple forms from epistles to centos, from fractals to prayers. These poems are brave in their excavations of grief and solace, wonder and rage, collective trauma and, ultimately, transcendence.

Zachary Asher is the author of a previous poetry collection, Scarlight (Ravenna Press, 2014). He has an MFA in Creative Writing from Vanderbilt University, where he was a founding editor of Nashville Review. Today he lives and teaches in Los Angeles.
Praise and Reviews:

“In Zachary Asher’s gone bird in the glass hours it is the grievers who heal the grieving. Here, life is insistent, whether it is a frog in the pulse or a river that refuses to dry up or the days when weeping both rejoices and sorrows. In Asher’s poems, poets and god divide and erase the languages of dark hymns, yet even through the sadness there’s still a joy that can take us back to the time when everyone we loved was still alive. In these poems there’s a way to be winged, a way to hope through the darkness.”
—Traci Brimhall, author of Come the Slumberless to the Land of Nod and Our Lady of the Ruins

“Like some wandering twenty-first-century Chagall working his magic with words instead of paint, Zachary Asher upends and refreshes the visible world with the balance and grace of an acrobat. Floating and grounded, reverent and irreverent, gone bird in the glass hours is an elegy shot through with ode. Whether limning moments of epiphany or tragedy, ancient Judaic practice or daily ritual in our time of tech, the wonders in this poem play are informed by faith, sharpened by erotic love, and drenched in the color blue, in almost mystical celebration. A not-so-subterranean ode that dwells, above all, in the blue of radiant mystery.”
—Sarah Maclay, author of Music for the Black Room and The White Bride

"Zachary Asher writes of 'the accidental / beauty of being alive' in this moving and hybrid Jewish work—a mystic probing, a searchingly literary investigation into the mystery of our transience."
—Edward Hirsch, author of Gabriel and The Living Fire: New and Selected Poems