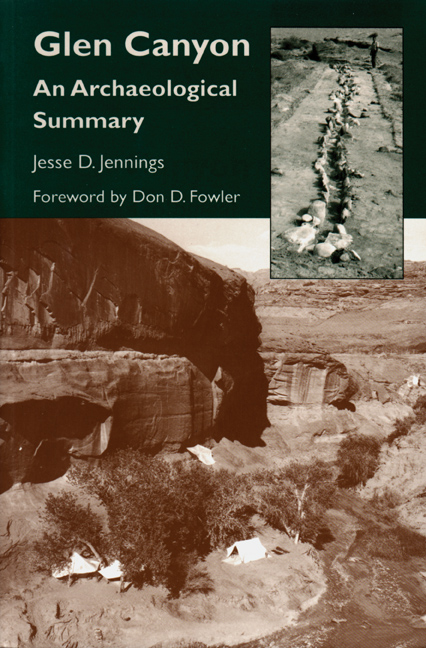 In 1956, Congress passed legislation that provided authorization and funds for emergency research to be conducted in Glen Canyon in response to the threat of losses posted by the construction of the Glen Canyon Dam in northern Arizona. For eight years, scientists worked against the clock to record the archaeology, geology, history, and paleontology of the region before the waters of Lake Powell covered the area.

In this highly interpretive summary, Jesse Jennings preserves the achievements of the salvage team and explains how the finds affected previous conclusions. Maps and photographs capture archaeological artifacts as well as the landscape of the area. This book also highlights the larger consequences of the massive salvage project — among them the stimulation of additional Southwest research, the applications of techniques made in response to emergency situations, and a valuable perspective on the Pueblo culture. Because this area is becoming increasingly controversial, with a raging debate over whether Lake Powell should be drained, Glen Canyon: An Archaeological Summary stands as more than a model of salvage archaeology. It is also a record and testament of the rich history of Glen Canyon.

Praise and Reviews:
“Worth the wait. Extremely readable.”
—The Dirt Brothers
“An excellent introduction to the archaeology of this magnificent area. Its republication will bring to a new generation of readers an appreciation for and understanding of archaeological treasures which, for the most part, no longer exist.”
—Utah Historical Quarterly
“A landmark volume in southwestern archaeology. A virtue of this summary report is the skill with which data, conclusions, and questions are presented in clear readable form, free of the awkward jargon that encumbers too much archeological writing. Anyone interested in the development of archaeology in the last three decade will want to read it in full.”
—American Antiquity