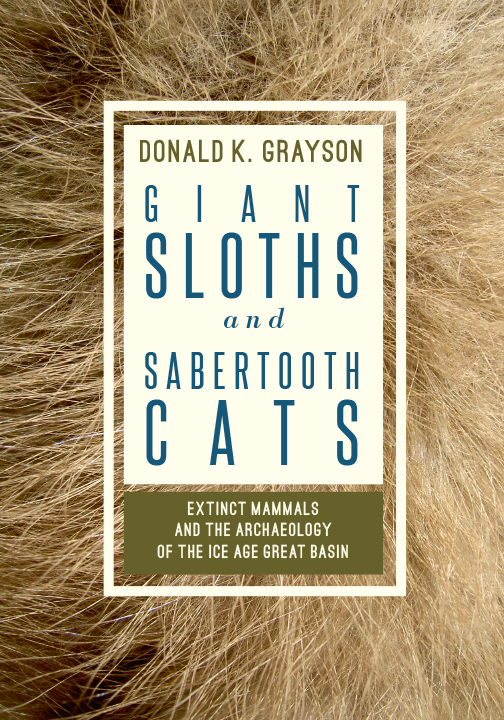 As the Ice Age came to an end, North America lost a stunning variety of animals. Mammoths, mastodon, llamas, ground-dwelling sloths the size of elephants, beavers the size of bears, pronghorn antelope the size of poodles, and carnivores to chase them—sabertooth cats, dire wolves, American lions and cheetahs; these and many more were gone by 10,000 years ago. Giant Sloths and Sabertooth Cats surveys all these animals, with a particular focus on the Great Basin. The book also explores the major attempts to explain the extinctions. Because some believe that they were due to the activities of human hunters, the author also reviews the archaeological evidence left by the earliest known human occupants of the Great Basin, showing that people were here at the same time and in the same places as many of the extinct animals.
Were these animals abundant in the Great Basin? A detailed analysis of the distinctive assemblages of plants that now live in this region leads to a surprising, and perhaps controversial, conclusion about those abundances.

If you are interested in Ice Age mammals or in the Ice Age archaeology of North America, if you are interested in the natural history of the Great Basin or the ways in which the plants of today’s landscapes might be used to understand the deeper past, you will be fascinated by this book.
Donald K. Grayson is a professor in the Department of Anthropology and the Quaternary Research Center at the University of Washington. He is a recipient of the Nevada Medal for scientific achievement and a member of the National Academy of Sciences. His publications include The Desert’s Past and The Great Basin: A Natural Prehistory.
Table of Contents:
List of Figures
List of Tables
Preface
Acknowledgments
A Tiny Bit of Background

1. A Sloth in Prison
2. The Great Basin Now and Then
3. A Zoologically Impoverished World
4. Dating an Ass
5. A Stable of Ground Sloths
6. Extinct Mammals, Dangerous Plants,  and the Early Peoples of the Great Basin
7. Clovis, Comets, and Climate:  Explaining the Extinctions

Appendix 1. The Relationship between Radiocarbon (C14)  and Calendar Years for 10,000 to 25,000  Radiocarbon Years Ago
Appendix 2. Common and Scientific Names of Plants Discussed in the Text
Appendix 3. Tall (>6 Feet) Mechanically Defended  Plants of the Mojave and Sonoran Deserts
Appendix 4. Maximum Height and Armature of  Sonoran and Mojave Desert Shrubs
Appendix 5. Maximum Height and Armature of  Great Basin Shrubs
Notes
References
Index
Praise and Reviews:
“A remarkable and personal account. Grayson brings to life this enthralling menagerie of strange beasts—their relationships, distributions, habits, and chronology—while highlighting the fascinating history of how we have learned about them. Hugely informative and entertaining, a pleasure to read and think about.”
—David E. Rhode, research professor of archaeology, Desert Research Institute, Reno, Nevada
"This is an excellent and easily read account of the Ice Age fauna of the Great Basin. It is one of the best at relating the large animals to the vegetation and physical environment of that time and the changes that followed the climate change at the end of the Ice Age. Its discussion of the extinction event, its timing and possible causes, should be read by all scientists working in that area.”
—Ernest Lundelius, Jr., Professor Emeritus of Vertebrate Paleontology, University of Texas at Austin
“Grayson takes us on a data-induced trek through the notable discoveries of America’s fantastical beasts, including scientific studies, newspaper articles, and pop culture.”—American Antiquity