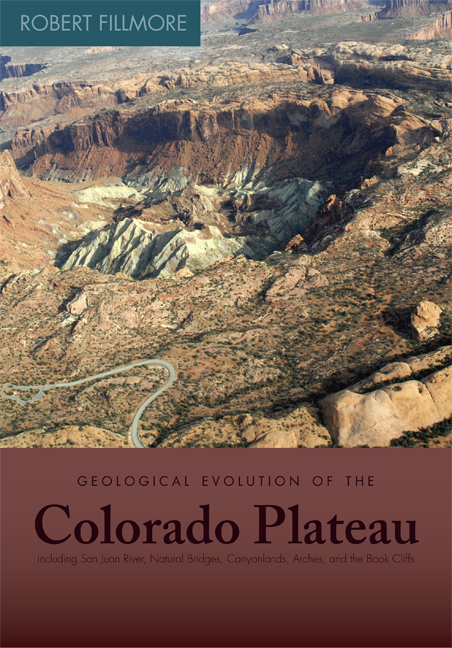 Robert Fillmore’s clear, easy-to-read text documents spectacular features of the eastern Colorado Plateau, one of the most interesting and scenic geologic regions in the world. The area covered in detail stretches from the Book Cliffs to the deep canyons of the San Juan River area. The events that shaped this vast region are clearly described and include the most recent interpretations of ongoing geologic forces. The book also includes mile-by-mile road logs with explanations of the various features for most of the scenic roads in the region, including Arches National Park, Canyonlands National Park, and the Natural Bridges area.
Robert Fillmore is professor of geology at Western State College of Colorado in Gunnison. He is the author of Geology of the Parks, Monuments, and Wildlands of Southern Utah.
Table of Contents:

Contents
List of Figures
Preface
1. An Introduction to the Science of Geology
2. The Pennsylvanian Period: The Rise of the Ancestral Rocky Mountains
3. The Permian Period: Rivers, Ergs, and Shorelines
4. The Mesozoic Era: Rivers, Dunes, Red Rocks, and Dinosaurs
5. The Triassic Period: Tidal Flats and Forests
6. The Jurassic Period: Sand and More Sand
7. The Cretaceous Period: The Sea Appears
8. The Tertiary Period: The Rise of the Colorado Plateau
9. The Quaternary Period: Canyon Cutting, Mammoths, and the Appearance of Humans

“Fillmore strives to provide more currency, depth, and insight than most general books on Colorado Plateau natural history, while simultaneously utilizing the effective writing style of his previous books to inspire readers to learn more and to extend their exploration of this magnificent region.”—Frank DeCourten, Sierra College