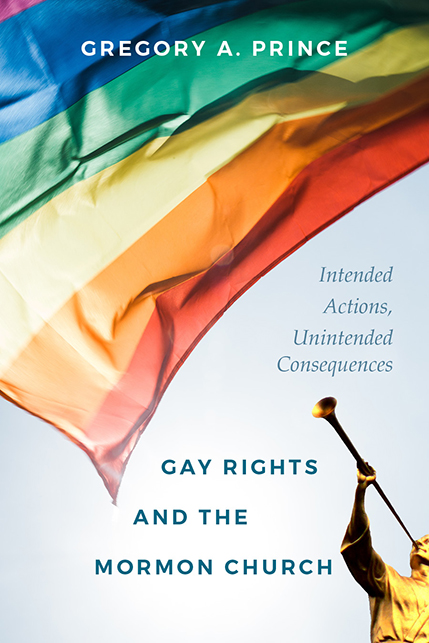 The Mormon Church entered the public square on LGBT issues by joining forces with traditional-marriage proponents in Hawaii in 1993. Since then, the church has been a significant player in the ongoing saga of LGBT rights within the United States and at times has carried decisive political clout.

Gregory Prince draws from over 50,000 pages of public records, private documents, and interview transcripts to capture the past half-century of the Mormon Church’s attitudes on homosexuality. Initially that principally involved only its own members, but with its entry into the Hawaiian political arena, the church signaled an intent to shape the outcome of the marriage equality battle. That involvement reached a peak in 2008 during California’s fight over Proposition 8, which many came to call the “Mormon Proposition.”

In 2015, when the Supreme Court made marriage equality the law of the land, the Mormon Church turned its attention inward, declaring same-sex couples “apostates” and denying their children access to key Mormon rites of passage, including the blessing (christening) of infants and the baptism of children.

Prince's interview with the Press: https://conta.cc/2HHmeTm

Gregory A. Prince's avocation in history has led him to write dozens of articles and three books, including the award-winning volumes David O. McKay and the Rise of Modern Mormonism (coauthored with Wm. Robert Wright) and Leonard Arrington and the Writing of Mormon History.
Table of Contents:
Preface
Introduction
1. Alta Club
2. Genesis
3. The Cure, 1.0
4. Spencer Kimball and The Miracle of Forgiveness
5. The Memorandum
6. Hawaii
7. Backlash, 1.0
8. Proposition 22
9. Amendment 3
10. The Cure, 2.0
11. A Constitutional Amendment
12. Dallin Oaks and the Interview
13. God Loveth His Children
14. What about Lesbians?
15. Proposition 8
16. Backlash, 2.0
17. The Kiss
18. Hollingsworth v. Perry
19. Three Men, Two Messages
20. Bridges to Somewhere
21. MormonsandGays.org
22. Kitchen v. Herbert
23. SB 296
24. The Last Domino
25. Religious Freedom
26. The Policy
27. Trans
28. Intersex
29. Suicide
30. The Scarlet Letter
31. What’s Next?
Notes
Bibliography
Index
Praise and Reviews:
“This is a complicated story, involving tangled legal issues and intricate political maneuvering. Prince is always aware of how the political and the legal affected actual lives. The story is fast-paced and engaging.”
—Richard Lyman Bushman is Gouverneur Morris Professor Emeritus of History at Columbia University and author of Joseph Smith: Rough Stone Rolling

"This is a book everyone has been waiting for. To have all of this information in one place—information which has previously been tucked away here and there in random internet document leaks and blog posts—is truly, truly valuable.”
—Joanna Brooks, author of The Book of Mormon Girl: A Memoir of an American Faith and coeditor of Decolonizing Mormonism: Approaching a Postcolonial Zion

“Offers important materials and timelines for the Church’s involvement in LGBTQ issues and pro­vides an important outline of events, along with references to important documents that allow the reader to dive deeper into the subject.”
—BYU Studies Quarterly


“This is an important book in the constant, complicated, and dynamic dialogue regarding homosexuality and modern Mormonism. Further, this compendium of ‘actions’ and ‘consequences’ will be immensely useful in the discussions yet to come.”
—Dialogue