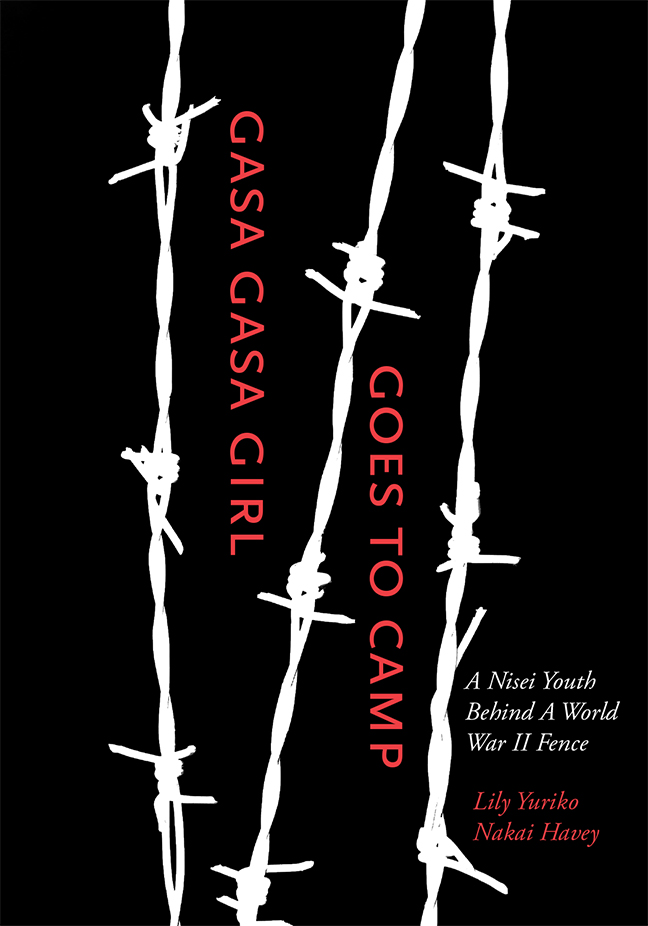 Lily Nakai and her family lived in southern California, where sometimes she and a friend dreamt of climbing the Hollywood sign that lit the night. At age ten, after believing that her family was simply going on a “camping trip,” she found herself living in a tar-papered barrack, nightly gazing out instead at a searchlight. She wondered if anything would ever be normal again.
In this creative memoir, Lily Havey combines storytelling, watercolor, and personal photographs to recount her youth in two Japanese-American internment camps during World War II. In short vignettes snapshots of people, recreated scenes and events a ten-year-old girl develops into a teenager while confined. Vintage photographs reveal the historical, cultural, and familial contexts of that growth and of the Nakais’ dislocation. The paintings and her animated writing together pull us into a turbulent era when America disgracefully incarcerated, without due process, thousands of American citizens because of their race.
These stories of love, loss, and discovery recall a girl balancing precariously between childhood and adolescence. In turn wrenching, funny, touching, and biting but consistently engrossing, they elucidate the daily challenges of life in the camp and the internees’ many adaptations.

Winner of the Evans Biography Award.
Selected by the American Library Association as one the Best of the Best from University Presses.
Finalist in the cover design category in the Southwest Book Design and Production Awards.
Lily Havey was born in Los Angeles. In 1942, along with 120,000 persons of Japanese descent, she was incarcerated at the Amache Relocation Center in Colorado. After World War II her family moved to Salt Lake City where she attended West High School and the University of Utah. She graduated from the New England Conservatory of Music and pursued an MFA at the University of Utah. She taught high school for thirteen years before establishing a stained glass business.

Author Website
Table of Contents:
Foreword by Cherstin Lyon
Preface
1. Camping at Santa Anita
2. Settling at Amache
3. Seasons, Joys, and Sorrows
4. Stepping toward Freedom
Epilogue
Acknowledgments
Glossary
Praise and Reviews:
“The writing is at times highly evocative, but it is the addition of Havey's artwork that sets this work apart from and adds a new dimension to the Japanese concentration camp story. Havey includes numerous small details that make the period come alive and shed new light on the prison camp experience.”
—Nancy Matsumoto, writer and contributor to Time, Newsweek, The Wall Street Journal, The New York Times, and The Densho Encyclopedia of the Japanese American Incarceration

“Havey has a distinctive voice and a gift for writing—the text flows and is quite easy to read, even when she is discussing emotionally difficult material. The book not only speaks eloquently about the pressures on the camp inmates, but provides useful insight into some hitherto hidden matters.”
—Greg Robinson, author of A Tragedy of Democracy: Japanese Confinement in North America and After Camp: Portraits in Midcentury Japanese American Life and Politics

"Through a sophisticated blend of artwork, prose, and photographic images, Lily Yuriko Nakai Havey has crafted in Gasa Gasa Girl Goes to Camp what is assuredly among the very most exquisite, insightful, and candid memoirs of the World War II Japanese American confinement experience."
—Arthur A. Hansen, Professor Emeritus of History and Asian American Studies, California State University, Fullerton

"This is a book that must be read, shared, discussed, taught,—and savored!”—Nichi Bei Weekly

“This is a one-of-a-kind memoir, reading like the best fiction yet shot through with scenes that, whether in paint or print, evoke the vivid reality of a life unfairly confined. I loved every page.”—The King’s English Bookshop

“What an absolutely amazing book! There can be no other estimation for such an important document that is part of the long-standing recovery effort related to the Japanese American internment experience.… One must pick up this essential and new addition to the canon of internment literatures.”–Asian American Literature Fans