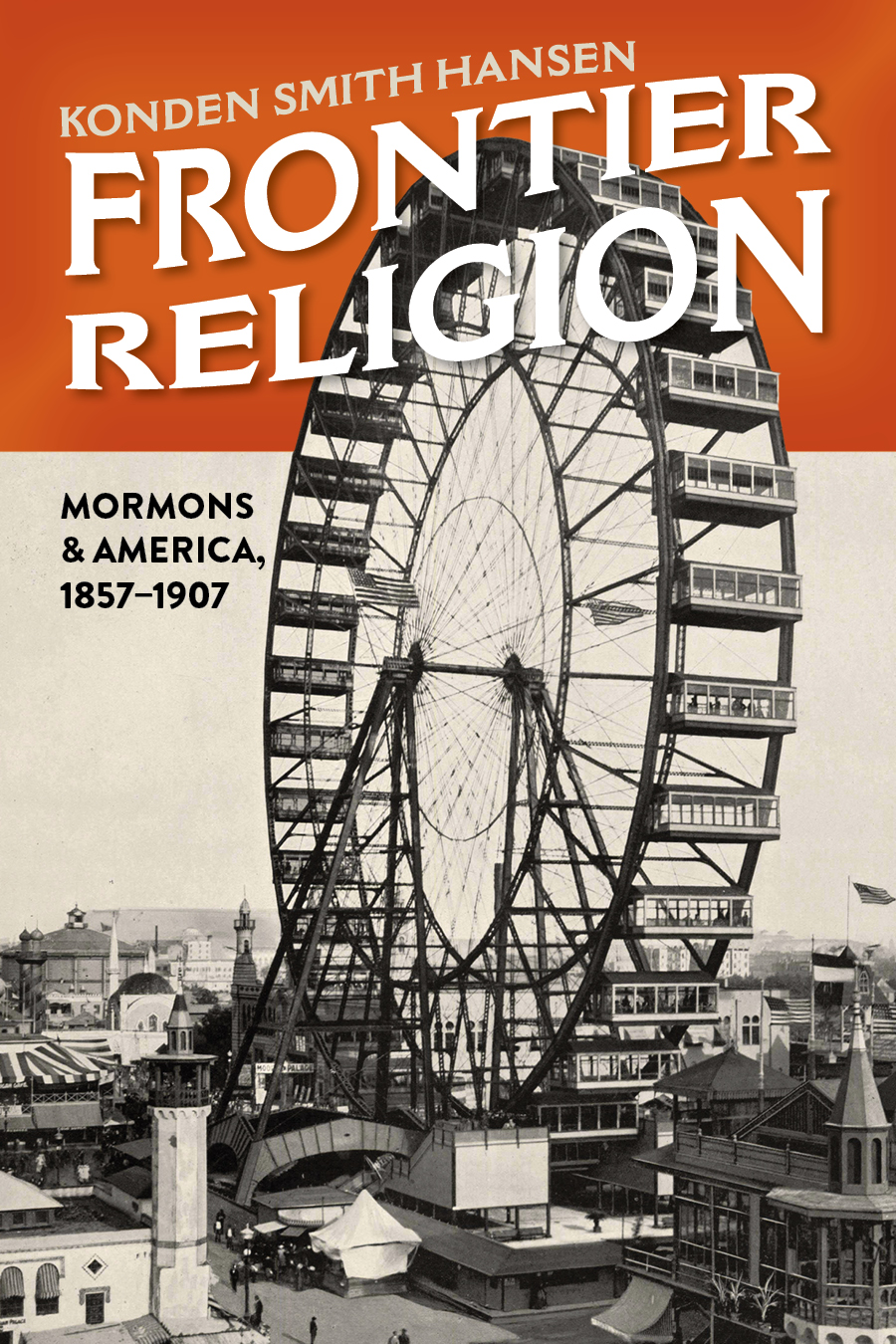 At the 1893 Columbian Exposition in Chicago, Mormons were deliberately excluded from one of the main attractions, the Parliament of Religions. Organizers believed that Mormonism, with its connections to polygamy, did not merit a place alongside other world religions being showcased for the similar ways in which they inspired people to follow God. At the same time, however, Americans who had long shown hatred or distrust toward their Mormon neighbors had begun to see Mormonism in a different light. Underlying this new view of Mormonism was a rapidly developing belief in America’s fading western frontier as a place linked to core American values such as self-reliance, personal freedom, and democratic rule. With a unique history intimately tied to the frontier, Mormonism began to be seen less as something outside America, and more as a faith closely associated with the country’s most important principles.

In Frontier Religion Konden Smith Hansen examines the dramatic influence these perceptions of the frontier had on Mormonism and other religions in America. Endeavoring to better understand the sway of the frontier on religion in the United States, this book follows several Mormon-American conflicts, from the Utah War and the antipolygamy crusades to the Reed Smoot hearings. The story of Mormonism’s move toward American acceptability represents a larger story of the nation’s transition to modernity and the meaning of religious pluralism. This book challenges old assumptions and provokes further study of the ever changing dialectic between society and faith.

Konden Smith Hansen is lecturer of religious studies at the University of Arizona. His work has been published in the Journal of Mormon History, Reading Religion, and Mormons and American Popular Culture.
Table of Contents:
Acknowledgments
Introduction

Part I: Kingdoms in Definition
1. Frontier Religion and the American Kingdom of God
2. Frontier Expansion and the Utah War, 1857–1858
3. Antipolygamy and the Closing of the Frontier, 1870s–1890

Part II: Kingdoms in Transition
4. Closing the “Frontier Line” and the Exclusion of Mormonism from the Parliament of Religions, 1893
5. The Inclusion of Mormonism at the Chicago World’s Fair, 1893
6. Embracing the Closed Frontier: The Reed Smoot Hearings, 1904–1907
Conclusion: Reopening the Frontier

Notes
Bibliography
Index
Praise and Reviews:
“Konden Smith Hansen demonstrates not just Mormonism’s interactions with Protestantism, but how both traditions, as well as the relationships between them, were connected to larger trajectories in the history of American religion and the growing secularization of the state. The monograph is a model for future studies that seek to connect Mormon history with larger narratives in American religious history and American history more generally.”
—James Bennett, associate provost and associate professor of religious studies, Santa Clara University

“Though many have claimed that Mormonism is the ‘American religion,’ the history is much more complicated. Konden Smith Hansen persuasively argues that in order to understand how that idea came to be, we need to first understand how the definitions of ‘American,’ ‘religion,’ and even ‘Mormonism’ transformed at the turn of the twentieth century. In this provocative study, Smith examines together a series of case studies that are traditionally kept separate, and in doing so demonstrates how Mormonism evolved from a kingdom to a denomination, and America from a religious empire to a secular nation-state.”
—Benjamin E. Park, assistant professor of history, Sam Houston State University

“Frontier Religion is a strong, original addition not only to the literature of late nineteenth-century Mormon history and its post-1890 transition period, but to broader religious-based meditations on the place of religion in frontier and postfrontier American governance. Highly recommended.”
—Journal of Mormon History

“This work serves many audiences. This book could be used in undergraduate or graduate courses in American history (and the frontier), religion and politics, gender, and American religious history, to name a few. It will also appeal to general non-specialist readers, even those unfamiliar with the subject matter, inspiring curiosity and interest. Smith Hansen’s comprehensive bibliography also encourages further reading on the fascinating intersections between religion, the frontier, and the state in the late nineteenth and early twentieth centuries.”
—Nova Religio