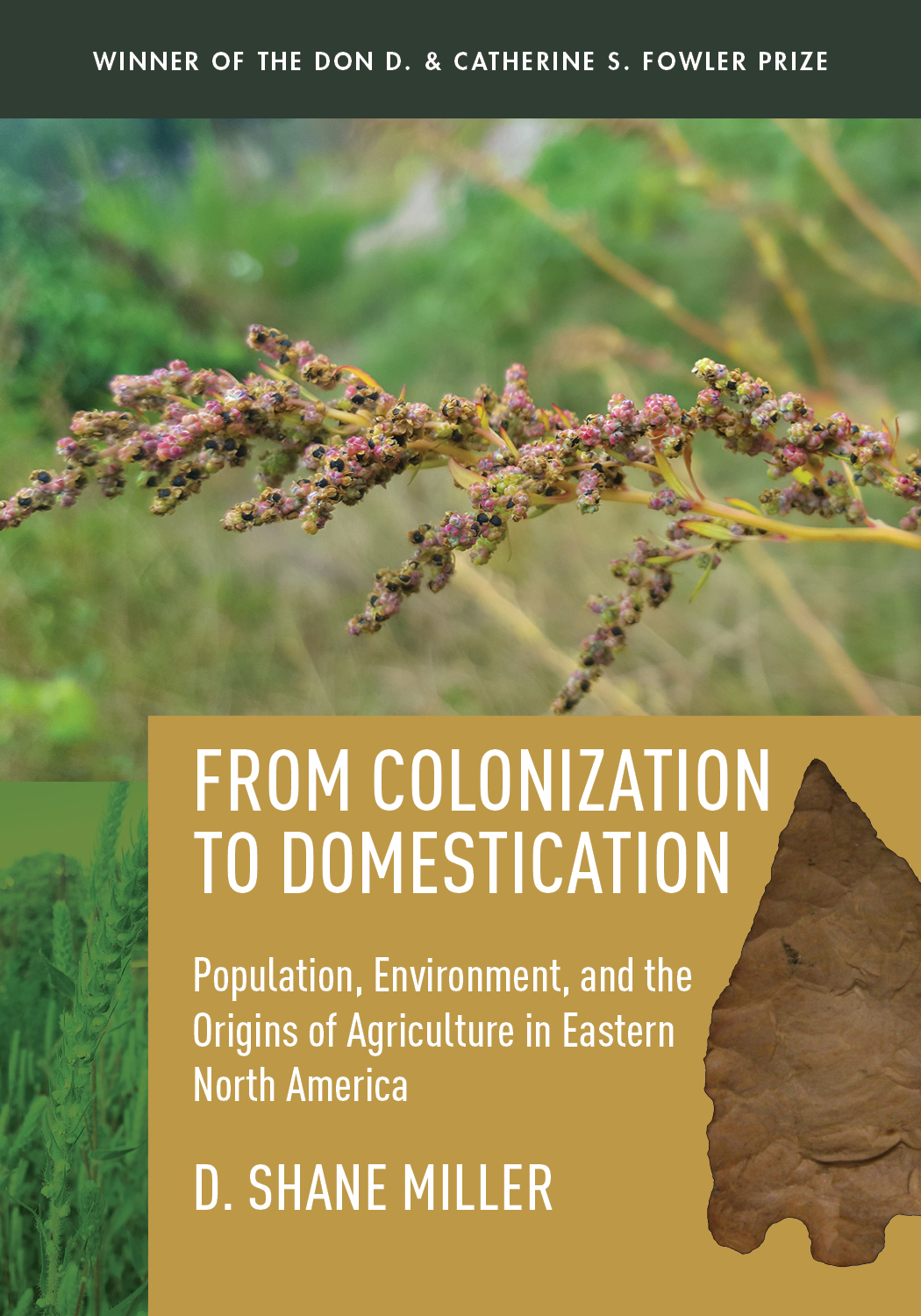 Winner of the Don D. and Catherine S. Fowler Prize.

Eastern North America is one of only a handful of places in the world where people first discovered how to domesticate plants. In this book, anthropologist Shane Miller uses two common, although unconventional, sources of archaeological data—stone tools and the distribution of archaeological sites—to trace subsistence decisions from the initial colonization of the American Southeast at the end of the last Ice Age to the appearance of indigenous domesticated plants roughly 5,000 years ago.

Miller argues that the origins of plant domestication lie within the context of a boom/bust cycle that culminated in the mid-Holocene, when hunter-gatherers were able to intensively exploit shellfish, deer, oak, and hickory. After this resource “boom” ended, some groups shifted to other plants in place of oak and hickory, which included the suite of plants that were later domesticated. Accompanying these subsistence trends is evidence for increasing population pressure and declining returns from hunting. Miller contends, however, that the appearance of domesticated plants in eastern North America, rather than simply being an example of necessity as the mother of invention, is the result of individuals adjusting to periods of both abundance and shortfall driven by climate change.
D. Shane Miller received his PhD from the University of Arizona in 2014 and is currently an assistant professor in the Department of Anthropology and Middle Eastern Cultures at Mississippi State University.
Table of Contents:
List of Figures
List of Tables
Acknowledgments
1. Behavioral Ecology and the Origins of Agriculture
2. Environmental and Chronological Building Blocks
3. From Projectile Points to Prey Size
4. Projectiles Points and Prey Size in the Lower Tennessee River Valley
5. The Ideal Free Distribution and Landscape Use in the Duck and Lower Tennessee River Valleys
6. A Boom-Bust Model for the Origins of Agriculture in Eastern North America
Bibliography
Index
Praise and Reviews:
“Miller’s methods are novel and make creative use of the archaeological data available. The overall theoretical framework has high potential for generality, meaning that the analysis is surely to be emulated and seen as a key contribution to the broader field of prehistory.”
—Bruce Winterhalder, professor emeritus, Department of Anthropology & Graduate Group in Ecology, University of California at Davis

“Not only is this a new form of regional data collection, Miller demonstrates manipulation of traditional big data sets, archaeological site files, in new ways with incorporation of data from other sources to examine biases. This approach and these methods will start unique trends in the archaeology of eastern North America.”
—Philip J. Carr, professor of anthropology and director, Archaeology Museum, University of South Alabama

“An interesting account of the conditions that led to the origins of plant domestication in the southeastern US some 5,000 years ago.… The book is well written, well illustrated, and well referenced.”—CHOICE

“Miller’s work is an excellent example of the usefulness of human behavioral ecology models in adding interpretive power to diachronic datasets. His conversational writing style makes this an accessible read for a wide range of audiences, including students of all stripes. With its broad applicability in terms of theoretical framework, datasets employed, and approachable writing, this book is a valuable read for researchers interested in population responses to changing ecological conditions in regions well outside eastern North America.”
—American Antiquity