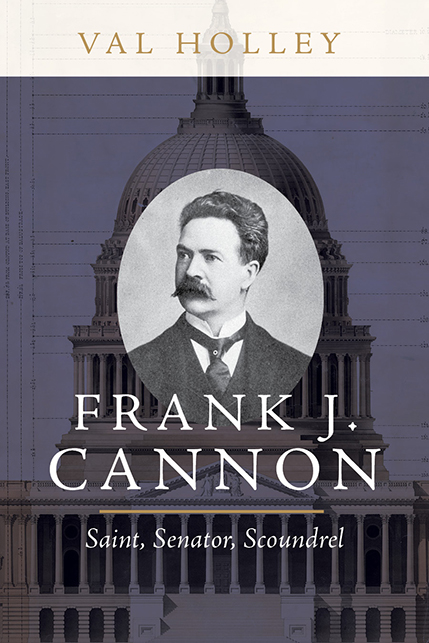 Utah’s path to statehood was the most tortuous in U.S. history, due in no small part to the Mormon practice of polygamy. Frank J. Cannon, newspaperman, Congressional delegate, and senator, guided Utah toward becoming the forty-fifth state in the Union in 1896. But when he lost favor with the LDS Church, his contributions fell into obscurity. In the 1880s, Congress dealt with the intransigence of the Church of Jesus Christ of Latter-day Saints over polygamy by enacting punitive new laws. Mormon lobbyists who pleaded for relief in Washington came home empty-handed before Cannon finally broke the logjam. He persuaded President Grover Cleveland to appoint judges who would deal mercifully with convicted polygamists and dissuaded Congress from disenfranchising all members by pledging that the church would abandon polygamy. But when Utah elected Mormon apostle Reed Smoot to the U.S. Senate in 1903, Cannon condemned what he called the reneging of LDS Church pledges to stay out of politics. He wrote scathing denunciations of Smoot and Mormon president Joseph F. Smith, co-authored the exposé Under the Prophet in Utah, and spearheaded the National Reform Association’s anti-Mormon crusade. Utah’s subsequent displeasure with Cannon ensured that his critical role in its statehood would be buried by omission.

Val Holley is an independent historian living in New York City. His 25th Street Confidential: Drama, Decadence, and Dissipation along Ogden’s Rowdiest Road won the Utah Book Award in Nonfiction.Table of Contents:Preface
Introduction
1. Not Mormon Enough
2. Political Defiance
3. “After They’ve Seen Paree”
4. Annus Horribilis
5. The Talented Mr. Cannon
6. Ogden Americanized
7. Defender of the Faith
8. Lonesome Republican
9. Nuggets of Truth
10. Last of the Utah Delegates
11. An Oedipal Senate Race
12. Silver or Bust
13. Foreign Affairs
14. Financial Anatomy
15. Hazardous Candor
16. Unspeakable Colorado
17. Bulging with Drama
18.  Debunker of the Faith
19. Work and Wages
List of Initials
Notes
Select Bibliography
Index
Praise and Reviews:“Val Holley’s long-anticipated biography of Frank J. Cannon, one of the most controversial men ever to be born in Utah, is worth the wait. Cannon’s role in ending the political warfare over polygamy is what made him matter in Utah’s history. His scandalous conduct—and how he got away with it—is what makes him interesting.”
—Will Bagley, historian and author of Blood of the Prophets: Brigham Young and the Massacre at Mountain Meadows
“Holley gives full information, warts and all, about Cannon’s early life—including that Cannon was frequently drunk, was an adulterer, and fathered a son out of wedlock. He also provides information on the role Cannon played in the transition of Utah from territory to state and is clear about Cannon’s role in the silver movement and his eventual break with the Republican Party. We have needed a full-scale biography of Frank J. Cannon for some time.”
—Thomas G. Alexander, author of Brigham Young and the Expansion of the Mormon Faith

“Holley accurately presents the paradox that was Frank J. Cannon.… It's well past time that Frank J., the scoundrel of the Cannons, get some notice for his many achievements. Holley's biography is a valuable, interesting read.”
—Mormon History and Culture blog

“Frank J. Cannon deserves this well-written, extensive, and excessively documented biography. The hell-bent scion of arguably the second-most powerful man in the church deserves his place in the canon of good Mormon history. The work is timely and worthy, and well worth the reading.”
— Association for Mormon Letters