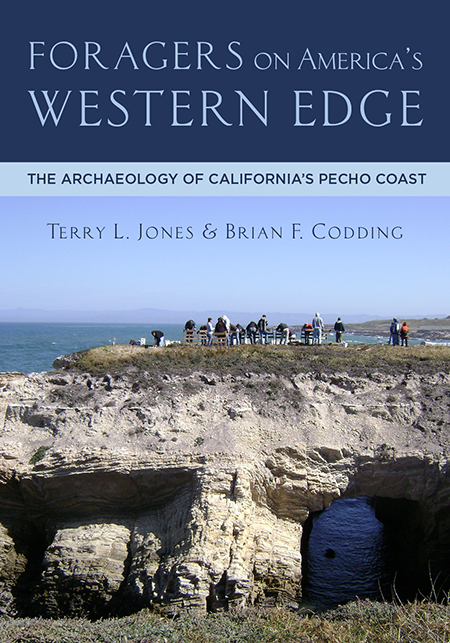 The California coastline has long been of interest to archaeologists. This book directs attention to the largely ignored Pecho Coast, a rugged, isolated, 20 km long peninsula between modern-day Morro Bay and Pismo Beach. Archaeological work along this stretch was last synthesized in 1972. Jones and Codding now bring together the extensive contract work and field school studies of the intervening years, shedding new light on the region’s early inhabitants.

The first people of the Pecho Coast were part-time residents who exploited shellfish, fish, and marine birds, including the flightless duck, Chendytes lawi, which sustained hunting drove to extinction ca. 2800 cal BP. This marked the only unequivocal case of prehistoric, human-caused extinction in western North America. Cold, productive seas allowed inhabitants to weather droughts of the Medieval Climatic Anomaly (950–600 cal BP), after which shell beads became increasingly abundant, representing either the initial appearance of Chumash-speaking peoples or attempts by Chumash leaders to consolidate power through gifting, reciprocal exchange, or forced conquest. During the mission era, fishing sustained the Native community as, for the first time, individuals became fully sedentary, foraging within a limited radius to avoid contact with the Spanish.

Brian F. Codding is associate professor of anthropology and director of the Archaeological Center at the University of Utah. He has published more than forty journal articles and recently co-edited the book Why Forage? Hunters and Gatherers in the Twenty-first Century.
Table of Contents:
List of Figures
List of Tables
Acknowledgments

Appendix A: Glass Beads from the Ethnographic Village Tstyiwi
(CA- SLO-51/H) by Thad M. Van Bueren
Appendix B: Charred Plant Remains from CA-SLO-51/H by Eric Wohlgemuth and Angela Arpaia
Appendix C: Radiocarbon Dates
Appendix D: Obsidian Hydration and Source Results
Appendix E: Beads from the Pecho Coast
Appendix F: Projectile Points from the Pecho Coast
References
Index
Praise and Reviews:
“The authors work hard to write up (in detail) the results of their excavations (and those of others), creating single component assemblages that will be available for other people to use long into the future. Jesse Jennings would approve of the Jones-Codding effort.”
—William Hildebrandt, founding president, Far Western Anthropological Research Group, Inc.

“Jones and Codding are to be commended for compiling, synthesizing, and interpreting data collected along the Pecho Coast since Greenwood’s seminal work published in 1972. This was no small task. Regional syntheses are few and far between along the California Central Coast and Jones’s and Codding’s book will be an important contribution.”
—Clayton G. Lebow, vice president/principal archaeologist, Applied EarthWorks, Inc.

“Landmark work, by far the best to date, on a part of coastal California that has received less attention than it should. Co-authored by a pair of the discipline’s most highly esteemed scholars, Foragers on America's Western Edge: The Archaeology of California’s Pecho Coast attends to archaeological and natural historical detail without losing sight of important large-scale patterns.”
—Robert Bettinger, Distinguished Professor Emeritus, Department of Anthropology, University of California, Davis

“Offers a modern example of coastal California archaeology applicable to archaeologists practicing anywhere.… It is an outstanding example of a modern archaeological monograph with clear and efficient presentation of background, methods, results, and significance. The authors have mastered the nuts and bolts of reporting archaeology: laying out chronology, line drawings, data tables, maps, and the design of appendices.”
—American Antiquity


“This book stitches together several CRM projects, archaeological field schools, important legacy studies by Greenwood, and the ethnohistoric record. Any one of these in isolation would have been a major contribution, but the fact that all four are combined in one volume is particularly commendable…. The Pecho Coast is an obscure corner of California—a turn of coastline that today is not really understood as a separate place at all, but rather a place between places. Prehistorically, it was the center of a world for people who called it home for thousands of years—a point that is apparent in the pages of this worthy book.”
—California Archaeology