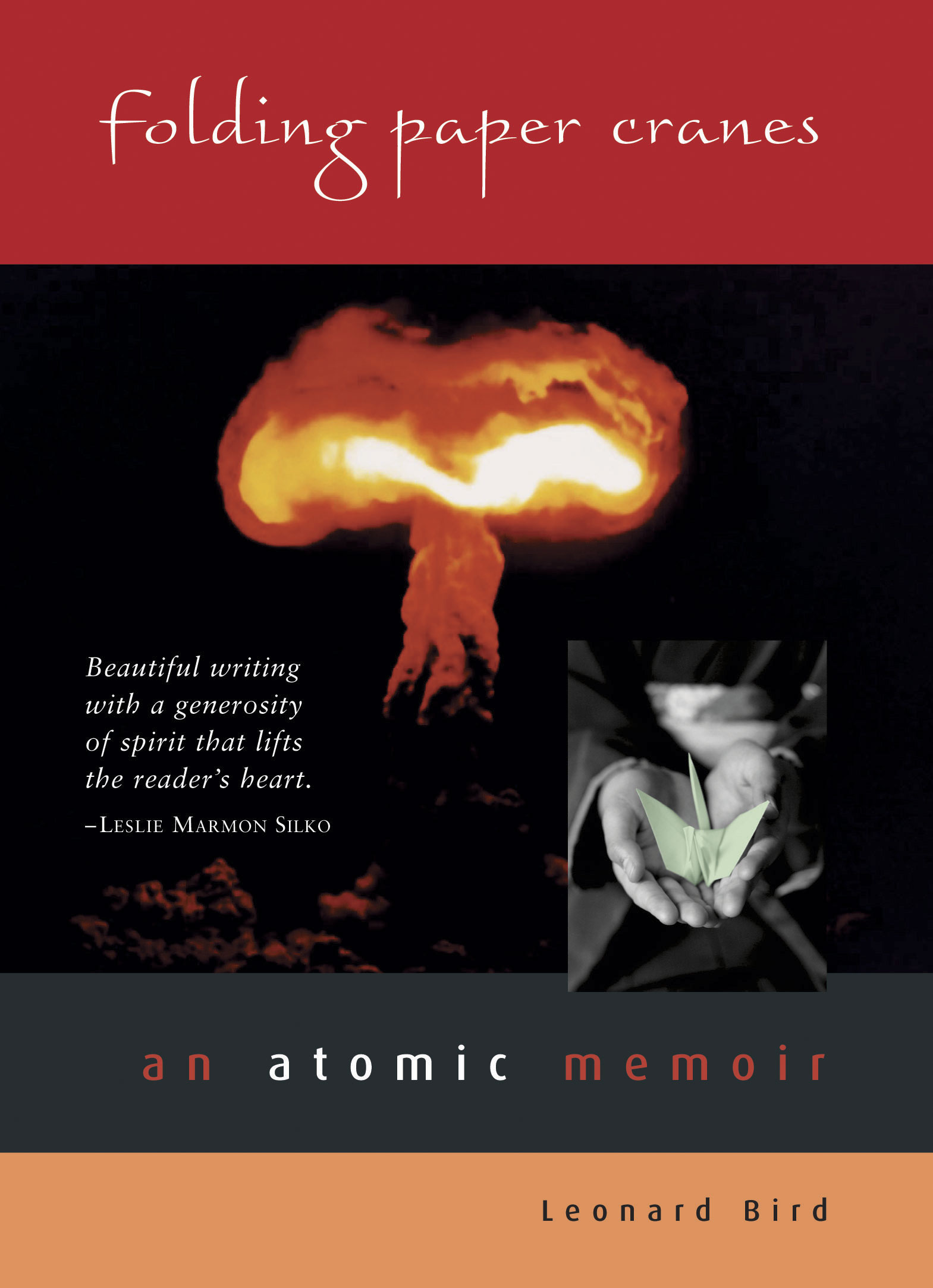 Between 1951 and 1962 the Atomic Energy Commission triggered some one hundred atmospheric detonations of nuclear weapons at the Nevada Test Site. U.S. military troops who participated in these tests were exposed to high doses of radiation. Among them was a young Marine named Leonard Bird. In Folding Paper Cranes Bird juxtaposes his devastating experience of those atomic exercises with three visits over his lifetime—one in the 1950s before his Nevada assignment, one in 1981, and one in the early 1990s—to the International Park for World Peace in Hiroshima.
Among the monuments to tragedy and hope in Hiroshima’s Peace Park stands a statue of Sadako Sasaki holding a crane in her outstretched arms. Sadako was two years old when the atomic bomb was dropped on her city; she was diagnosed with leukemia ten years later. According to popular Japanese belief, folding a thousand paper cranes brings good fortune. Sadako spent the last months of her young life folding hundreds of paper cranes. She folded 644 before she died.
As he journeys from the Geiger counters, radioactive dust, and mushroom clouds of the Nevada desert to the bronze and ivory memorials for the dead in Japan, Bird—himself a survivor of radiation-induced cancer—seeks to make peace with his past and with a future shadowed by nuclear proliferation. His paper cranes are the poetry and prose of this haunting memoir.
Leonard Bird was professor emeritus of English at Fort Lewis College. He died in 2010 as a result of his exposure to atomic testing. Read more about his life here. His wife, artist Jane Leonard, created the monoprint illustrations for the book.
Table of Contents:

Acknowledgments
Preface
1. The Morning Dove
2. Life in the Dead Zone
3. Collateral Damage
4. The Survivor
5. A Flight of Cranes
6. As This Plague Rages
Notes

"Bird’s deeply moving and compelling memoir takes an important place in a body of work bearing witness to generations of the terrible reality of nuclear testing and the use of nuclear weapons."—Mary Dickson, director of creative services at KUED Channel 7 and author of the essays "Downwinders All" and "Living and Dying with Fallout"

"With a lovely combination of prose and poetry, Leonard Bird bears witness to the terrible nuclear crimes committed by the United States government against innocent citizens in the name of ‘national security.’ . . . Bird gives us a deeply personal view . . . always with beautiful writing and with a generosity of spirit that lifts the reader’s heart."—Leslie Marmon Silko, author of Almanac of the Dead and Ceremony