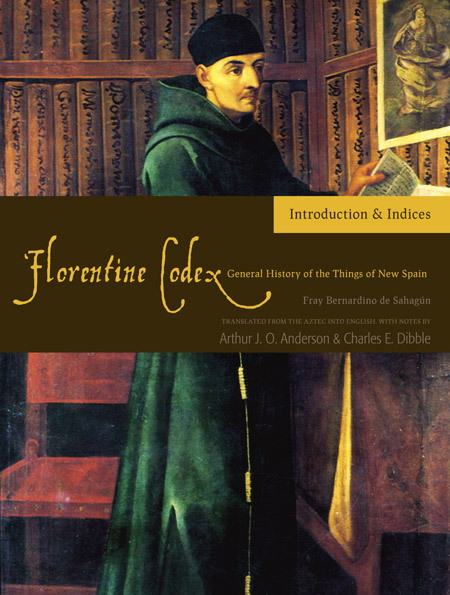 Written between 1540 and 1585, the Florentine Codex (so named because the manuscript has been part of the Laurentian Library’s collections since at least 1791) is the most authoritative statement we have of the Aztecs’ lifeways and traditionsa rich and intimate yet panoramic view of a doomed people.

This introduction to the Florentine Codex contains the original prologues to each volume written by Bernadino de Sahagun, which detail his intentions and personal experiences in compiling the Codex. Authors Dibble and Anderson dig into Sahagun’s past in “Sahagun’s Historia” and “Sahagun: Career and Character,” and discuss dating the Codex in “The Watermarks in the Florentine Codex.” This volume also includes indices of subject matter, persons and deities, and places for all twelve books.

Sahagun's Prologues and Interpolations
(translated from the Spanish by Charles E. Dibble):

Book I: The Gods
• Prologue
• To the Sincere Reader

Book II: The Ceremonies
• Prologue
• To the Sincere Reader
• Exclamation of the Author
• Comment on the Sacred Songs

Book III: The Origin of the Gods
• Prologue

Book IV: The Soothsayers
• Prologue
• To the Sincere Reader

Book VII: The Sun, Moon, and Stars, and the Binding of the Years
• Prologue
• To the Reader

Book XII: The Conquest
• To the Reader