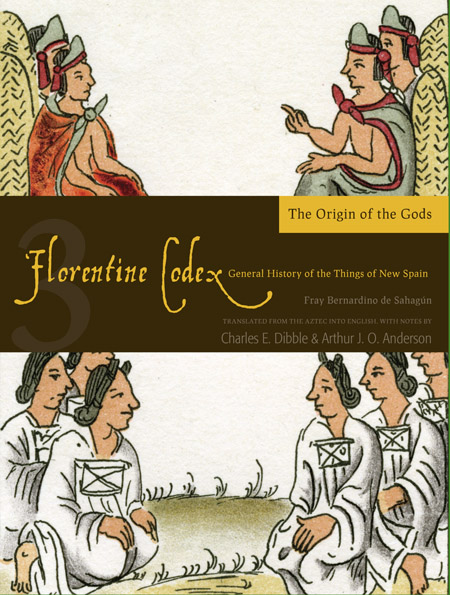 Book Three describes in detail the excitingand sometimes bloody—origin stories of Uitzilopochtli, Titlacauan, and Quetzalcoatl. The appendix discusses other significant religious aspects of the Aztec religion, such as how boys are raised to be high priests and what happens to Aztecs after death.

First Chapter, in which it is told how the gods had their beginning

Second Chapter, which telleth how they considered one named Titlacauan or Tezcatlipoca to be a god

Third Chapter, which telleth the tale of Quetzalcoatl, who was a great wizard

Fourth Chapter, which telleth how the glory of Quetzalcoatl came to an end and how the sorcerers came to him

Fifth Chapter, which telleth of another portent which the sorcerer Titlacauan brought about

Sixth Chapter, which telleth how the Tolteca were angered because of the marriage of the daughter of Uemac

Seventh Chapter, where is related yet another portent which the sorcerer brought about, by which Tolteca died as they performed penances

Eighth Chapter, which telleth of another portent which that same sorcerer brought about, whereby yet many more Tolteca died

Ninth Chapter, which telleth of still another portent which this same sorcerer brought about, by which very many more Tolteca perished

Tenth Chapter, which telleth of still another portent which this same sorcerer brought about, by which he portended evil for Tula

Eleventh Chapter, in which it is told yet another portent which this same sorcerer brought about, by which he mocked them

Twelfth Chapter, which telleth how Quetzalcoatl fled, took flight, when he went there to Tlapallan

Thirteenth Chapter, in which are told the marks which Quetzalcoatl left in place upon the stone with his hands when he rested himself there

Fourteenth Chapter, which telleth how Quetzalcoatl's vassals froze, died in the ice, as they passed between Iztac tepetl and Popocatepetl

Appendix to the Third Book