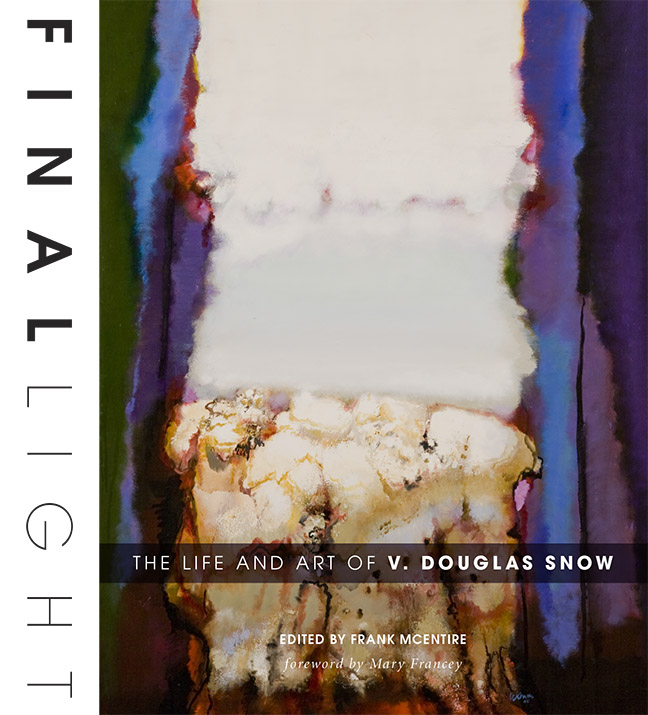 The motivating force behind Final Light was to document Snow’s “visual language”—forged early in his career from abstract expressionist influences typified by Willem de Kooning, Joan Mitchell, Robert Motherwell, and Franz Kline, among others. Final Light represents the first book to examine the legacy of this significant Utah educator and painter. Renowned scholars, writers, and activists who are familiar with Snow’s work—many of whom were his close friends—recount personal experiences with the artist and delve into his motives, methods, and reputation. The volume not only offers their commentaries, but also contains more than 80 exquisite full-color reproductions of Snow’s paintings, dating from the 1950s until 2009, when he died in an auto accident at the age of eighty-two.

A nationally recognized artist, Snow chose to stay in Utah where, when not teaching at the University of Utah, he roamed the southern Utah desert gaining inspiration from the red rock formations, especially the Cockscomb outside his studio near Capitol Reef National Park. Snow said, “Every artist probably wonders if he or she made the right decision to dig in to a certain place.” He dug into the landscape in and around Southern Utah and never regretted it. Just as “Tennessee Williams’s South, William Faulkner’s Mississippi, [or] John Steinbeck’s West Coast, formed their work,” the desert lands of the Colorado Plateau formed Snow’s. Their sense of place, “without provincialism,” said Snow “is what gives their art its enduring power.” Final Light will appeal to art historians and art lovers, especially those interested in abstract expressionism and the art of Utah, the West, and the Southwest.

Chosen by 15 Bytes, Utah's art magazine, as the most exceptional art book for 2014.
Frank McEntire, former executive director of the Utah Arts Council, is well known in Utah for his work of the past thirty years as a sculptor, curator, writer, and arts administrator. His sculptural works have been exhibited in Idaho, New Mexico, Texas, and Utah, and he has curated exhibitions for most major museums and art centers in the state. His decade of published reviews as the art critic for The Salt Lake Tribune and Salt Lake Magazine, as well as essays for other magazines and catalogs, provide insightful documentation of visual art trends in the western region.
Table of Contents:

The Art
Seeing Snow -  Will South

Praise and Reviews:
“Considering the time in which he worked, Snow may well emerge as the single artist to date who has best understood and interpreted Utah’s mountains, rock formations, canyons, and deserts in a compelling visual language.”—from the foreword by Mary Francey