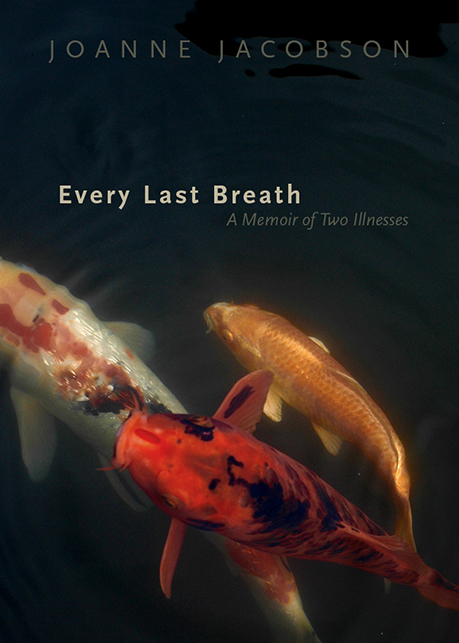 When Joanne Jacobson’s writing about her mother’s respiratory illness was interrupted by her own diagnosis with a rare blood disorder, she found her perspective profoundly altered. Every Last Breath follows these two chronic illnesses as they grow unexpectedly intertwined. Rejecting a fixed, retrospective point of view and the forward-moving trajectory of conventional memoir, Jacobson brings the reader to the emotionally raw present—where potentially fatal illness and “end of life” both remain, emphatically, life. As chronic illness blurs the distinction between illness and wellness, she discovers how a lifetime of relapse and remission can invite transformation. Written at the fluid, unsettling boundary between prose and poetry, these essays offer a narrative diagnosis of ongoing revision.

Joanne Jacobson is the author of Authority and Alliance in the Letters of Henry Adams (1992) and Hunger Artist: A Suburban Childhood (2007). Her critical essays and memoirs have appeared in such publications as Bellevue Literary Review, New England Review, Fourth Genre, and The Nation and her work has been supported by the National Endowment for the Humanities and the American Council of Learned Societies.

Author website: www.joannejacobson.com/
Table of Contents:Every Last Breath
Economy
Goodbye and Goodbye
In the Year of Masking Tape
Mirror Writing
Written in Blood
Resignation
If My Disease Were an Animal
Dead Reckoning
My Mother, Gardening
Thoreau’s Body
Book of Names
Acknowledgments
Praise and Reviews:“Every Last Breath is a beautiful and brave exploration of the ephemerality of the body, the breath, and the world. It makes a valuable contribution to the literature of grief and the growing body of work that is focused on the intersection between body and belief.”
—Jennifer Sinor, author of Ordinary Trauma and Letters Like the Day
“Every Last Breath is a book in which every last word illuminates the mutable, mortal body we singly inhabit and commonly share. It speaks deeply to the human experience of incremental time and ongoing, subtle, threshold-crossing change. It is impossible to overstate the beauty and intelligence that imbues Joanne Jacobson’s meditation on the ecstatic and perishable condition of our lives.”
—William Merrill Decker, author of Kodak Elegy: A Cold War Childhood

“In this brilliant memoir, so gorgeously written, so richly intelligent, and so achingly heartfelt, Jacobson tells the stories of two illnesses, a mother’s and a daughter's, one of breath and one of blood. Jacobson plunges all the way down (to borrow from Emily Dickinson) to ‘where the meanings are.’ With its lyrical compression and unguarded honesty, Every Last Breath is a knock-out.”
—Richard McCann, author of Mother of Sorrows
“Both memoir and biography, this book tells the interrelated stories of two Jewish-American women, mother and daughter, as their failing bodies confront them with their mortality. Jacobson’s work is heart-wrenching without being maudlin. The respective illnesses are keenly observed. Family relationships are sweet and brutal. The body, the human body in its exquisite frailty, recurs as an object of reflection.”
—Scott Abbott, author of Immortal for Quite Some Time
“Beautiful and yet often fierce in its prose, Every Last Breath draws me into Jacobson’s story—an interlocking narrative of her mother’s independent and determined last years, and of her own sudden confrontation with a rare life-threatening blood disorder. These powerful essays can stand alone, but together they are a humbling reminder that aging and illness can make even the ordinary unknowable.”
—Marsha Hurst, lecturer in Narrative Medicine, Columbia University
“In Every Last Breath: A Memoir of Two Illnesses, scholar and memoirist Joanne Jacobson strings twelve independently stunning essays together to create a lyrically compressed contemplation of the always frail body.”
—newpagesblog.com