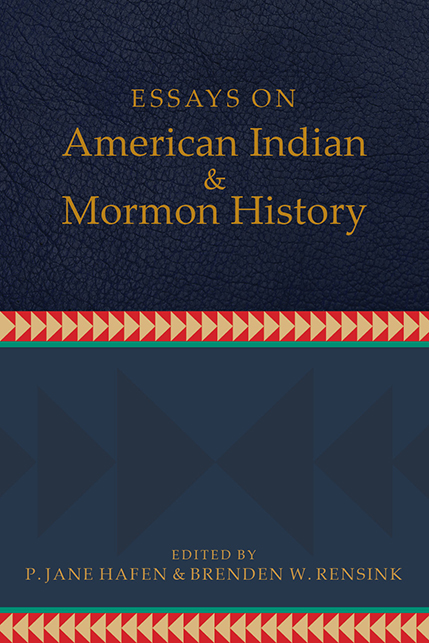 American Indians have long played a central role in Mormon history and its narratives. Their roles, however, have often been cast in support of traditional Mormon beliefs and as a reaffirmation of colonial discourses.

This collection of essays, many the result of a seminar hosted by the Charles Redd Center for Western Studies at Brigham Young University, explores the historical and cultural complexities of this narrative from a decolonizing perspective. Essays cover the historical construction of the “Lamanite,” settler colonialism and the Book of Mormon, and connections between the Seneca leader Handsome Lake and Joseph Smith. Authors also address American Indian Mormon tribal identities, Navajo and Mormon participation at the dedication of Glen Canyon Dam, the impact of Mormon Polynesian missionaries in Diné Bikéyah, the ISPP, and other topics. Prominent American Indian Mormon voices lend their creative work and personal experiences to the book.

With the aim of avoiding familiar narrative patterns of settler colonialism, contributors seek to make American Indians the subjects rather than the objects of discussion in relation to Mormons, presenting new ways to explore and reframe these relationships.
P. Jane Hafen (Taos Pueblo) is professor emerita of English at the University of Nevada, Las Vegas. She is author of Reading Louise Erdrich’s Love Medicine, and editor of Dreams and Thunder: Stories, Poems, and the Sun Dance Opera.

Brenden W. Rensink is associate director of the Charles Redd Center for Western Studies and associate professor of history at Brigham Young University. He is the author of Native but Foreign: Indigenous Immigrants and Refugees in the North American Borderlands.
Table of Contents:
List of Figures and Tables
Introduction – P. Jane Hafen and Brenden W. Rensink
Poetry Selections from Rain Scald – Tacey Atsitty
Sovereignty and the Corn Soup Social – Michalyn Steele
From Buffalo to Bread – Darren Parry

Part One: Native Experience with the Early LDS Church, Interpretation of Mormon Scripture, and Literary Representations
1. The Book of Mormon as Mormon Settler Colonialism
Elise Boxer
2. Other Scriptures: Restoring Voices of Gantowisas to an Open Canon
Thomas W. Murphy
3. Joseph Smith in Iroquois Country: A Mormon Creation Story
Lori Elaine Taylor
4. When Wakara Wrote Back: The Creation and Contestation of the “Paper Indian” in Early Mormon Utah
Max Perry Mueller
5. In the Literature of the Lamanites: (Un)settling Mormonism in the Literary Record of Native North America, 1830–1930
Michael P. Taylor

Notes
Bibliography
List of Contributors
Index
Praise and Reviews:
“This volume will improve considerably the field of Mormon studies by contributing to its critical and intersectional turn. There has been no comparable book-length work focusing on the experiences of American Indian Mormons from an indigenous perspective. This compilation of essays brings together many voices in a way that builds strength and fosters reflection on shared issues and points of contact.”
—Joanna Brooks, author of The Book of Mormon Girl: A Memoir of an American Faith and coeditor of Decolonizing Mormonism

“Essays on American Indian and Mormon History cleverly interweaves literary and historical analysis with personal anecdotal tales from Native and allied scholars. It explores overlooked indigenous perspectives through interdisciplinary essays and vignettes that range from whimsical to factual, and thoughtfully balanced to broaden our understanding of Indian-Mormon history, memory, and meaning within a context of colonization.”
—Matthew Garrett, author of Making Lamanites:Mormons, Native Americans, and the Indian Student Placement Program, 1947–2000

“This compilation should be seen as an invitation not only to study this fascinating topic more acutely, but also to integrate sources and methodologies that challenge simplistic renditions of the relationship between American Indians and the Mormon faith.”
—Western Historical Quarterly

“These essays provide scholars with new stories, additional insights, and a more complete picture of the enmeshed fields of Ameri­can Indian and Mormon histories. In all, Essays on American Indian and Mormon History is a solid volume that serves as an initial foray into potentially groundbreaking scholarship.”
—Journal of Arizona History

“Essays on American Indian and Mormon History is a significant intervention in the growing literature that examines the interactions between Native peoples and Latter-day Saint religion…. the collection provides an indispensable introduction to the main themes of that history. This excellent compilation will doubtless provide a solid foundation for future scholarship on Indian and Latter-day Saint history.”
—Journal of Mormon History