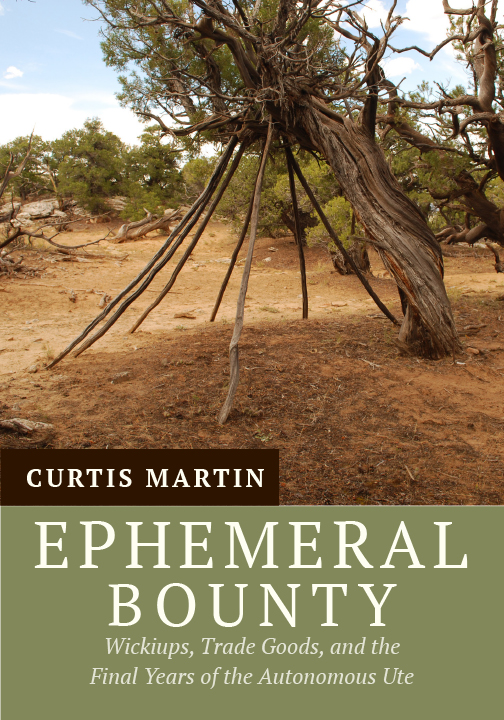 The study of the last remaining Ute wickiups, or brush shelters, along with the historic artifacts found with them has uncovered an understudied chapter of Native American history—the early years of contact with European invaders and the final years of Ute sovereignty. Ephemeral Bounty is the result of this archaeological research and its findings on the protohistoric and early historic Ute Indians of Colorado.
The Colorado Wickiup Project is documenting ephemeral wooden features such as wickiups, tree-platforms, and brush horse corrals that remain scattered throughout the mesas, canyons, and mountains of the state. They date from when European newcomers first arrived with a bounty of new things—horses, metal knives and axes, guns, and brightly colored glass beads—which were readily adopted by the Utes.
The Project is unique in using the techniques of metal detection, historic trade ware analysis, and tree-ring dating of metal ax–cut wickiup poles to distinguish the Ute sites from historic Euro–American ones. Through this analysis, researchers have demonstrated that not all Utes left Colorado for the reservations in Utah during the “final removal” in 1881, as has been generally believed. A significant number remained on their homelands well into the early decades of the twentieth century, building brush shelters and living much as they had for generations, but with new tools and weapons.

Appendix B Form: Aboriginal Wooden Feature Component Form
Curtis Martin is a research archaeologist for Grand River Institute and Dominquez Archaeological Research Group, Inc., both in Grand Junction, Colorado. He is the Principal Investigator for the Colorado Wickiup Project, which received the 2014 Governor’s Award in recognition of the project.

Learn more about the Colorado Wickiup Project.
Praise and Reviews:
“A wealth of new data, written in a relaxed and readable style.”
—Michael Metcalf, Metcalf Archaeological Consultants, Inc.
“The study adds an important component to the late cultural history of the Colorado Utes, one that has almost escaped notice by white documentarians. It also provides a blueprint for the study of wickiups and related timber structures, one that has been honed by the team’s long-standing investigation in the field and that may be applied from Alaska to Patagonia—anywhere that people have built shelters at high altitudes.”
—W. Raymond Wood, Professor Emeritus of Anthropology at the University of Missouri and author of A White-Bearded Plainsman
“Well researched, profusely illustrated, and written in an easily readable style for both avocational and professional audiences.…This publication will be a standard “go to” reference for many years.”
—Southwestern Lore