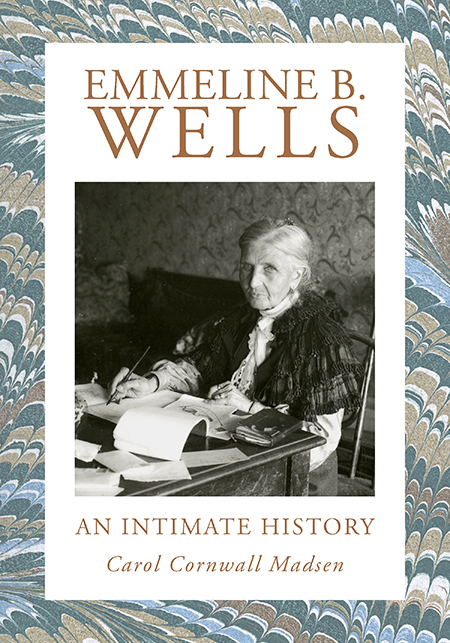 Emmeline B. Wells was the most noted Utah Mormon woman of her time. Lauded nationally for her energetic support of the women’s rights movement of the nineteenth century, she was a self-made woman who channeled her lifelong sense of destiny into ambitious altruism. Her public acclaim and activism belied the introspective, self-appraising, and emotional persona she expressed in the pages of her forty-seven extant diaries. Yet she wrote, “I have risen triumphant,” after reconciling herself to the heartaches of plural marriage, and she pursued a self-directed life in earnest.
This new biography tells the story of the private Emmeline. The unusual circumstances of her marriages, the complicated lives of her five daughters, losses and disappointments interspersed with bright moments and achievements, all engendered the idea that her life was a romance, with all the mysterious, tragic, and sentimental elements of that genre. Her responses to that perception made it so. This volume, drawing heavily on Emmeline Wells’s own words, tells the complicated story of a woman of ambition, strength, tenderness, and faith.

“Carol Madsen, having previously dealt with Emmeline Wells’ public life, now ably explores her interior landscape, tracing the contrast between her public triumph and her private pain, from her ‘wild and fanciful’ youth to her unexpected humiliations. Wells’ excellent record-keeping habit enables the rich detail of her story. This extended and sympathetic inner biography of the best known Mormon woman of her time is told largely in her own words, linked by Madsen’s steady and judicious narrative.”
—Claudia L. Bushman, author of Contemporary Mormonism

“Emmeline B. Wells is an admirable and engaging work of historical research and imagination. It offers a compelling portrait of an ambitious, loving, often unhappy but always striving human being, and as it does so it offers readers also a refreshing new perspective on domestic and political possibilities in the nineteenth century.”
—Mormon Studies Review

"A thorough and engaging biography of Emmeline Wells’s private life. Massive amounts of careful research create a three-dimensional picture of Mormon society from Nauvoo to Salt Lake City as Emmeline moved through it, as well as the late 19th- and early 20th-century American suffrage and national political circles she became part of.  The biography is as readable as a good novel and even more engaging because the story it tells is of a real woman whose extraordinary achievements were made despite personal tragedies that would have defeated someone less hopeful and resilient."
—Susan Elizabeth Howe, poet and retired professor of English, Brigham Young University

“Despite the daunting physical presence of the book, its prose and short chapter structure makes it accessible for a broad audience. . . . The intimate biography is important because it recognizes the multiple ways we can know this woman who is famous for her remarkable public achievements. Readers not only see someone who writes, leads, and organizes. We see someone who feels.”
—Juvenile Instructor

“Few historians have written as well or as much on Mormon history as author Carol Madsen, and in this work she does not disappoint in the least. Required reading for anyone associated with Mormon studies as well as researchers studying 19th century American religion more generally or women’s history, and certainly recommended for anyone who enjoys a good biography."
—Association for Mormon Letters