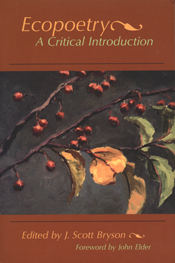 The burgeoning field of ecocriticism is beginning to address the work of such ecopoets as Gary Snyder, Mary Oliver, W. S. Merwin, and Wendell Berry, among others, whose poems increasingly deal with ecological and environmental issues. Ecopoetry: A Critical Introduction assembles previously unpublished contributions from many of the most important scholars in the field as they discuss the historical and crosscultural roots of ecopoetry, while expanding the boundaries to include such themes as genocide and extinction, the lesbian body, and post colonialism. This volume gathers these necessary voices in the emerging conversation regarding poetry’s place in the environmental debate.

"The essays are uniformly thoughtful, perceptive, and readable...[and] engage the current scholarship gracefully, without pretense or pedantry. Each chapter is stuffed with insights."—John Tallmadge, The Union Institute