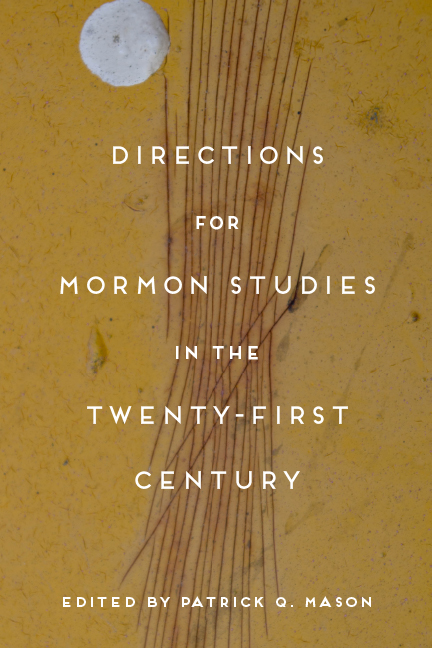 A new and exciting era in Mormon studies has emerged from a confluence of factors: an academy more attuned to the significance of religion, the increased public prominence of Mormons and Mormonism, and an increasing number of scholars applying ever-more sophisticated methods to the study of Mormonism. Directions for Mormon Studies in the Twenty-First Century captures this fruitful time by bringing together some of the most influential voices across the generations of Mormon studies. Neither a survey of the field nor a mere recapitulation of dominant themes, this volume charts out areas for exploration and modes of inquiry that reflect the maturation of the field and help set the agenda for the next generation of Mormon studies scholarship.

In previously unpublished essays, the volume’s distinguished authors offer new insights on a number of essential themes: a (re)assessment of twentieth-century Mormonism; the dynamic interplay of Mormonism’s American roots with its international expansion and encounter with global diversity; the ways Mormonism has shaped and been shaped by modern theories and discourses of race; new modes of thinking about the individual Mormon subject; and reflections on theory and method in Mormon studies. These essays display Mormon studies in its emergent interdisciplinarity, with contributions from religious studies, history, economics, literary criticism, sociology, and anthropology. Simultaneously erudite and accessible, the collection will help readers ask new questions and discover new answers.
Patrick Q. Mason is associate professor of religion, chair of the Religion Department, and Howard W. Hunter Chair of Mormon Studies at Claremont Graduate University. In addition to numerous articles, he is author of The Mormon Menace: Violence and Anti-Mormonism in the Postbellum South and coeditor of War and Peace in Our Time: Mormon Perspectives.

Part II: American Church or World Religion?
3. Monks, Nationalists, and the Emperor: The Mormon Struggle in Japan, 1901–1924
Shinji Takagi
4. Church Unity and the Challenge of Cultural Diversity: A View from across the Sahara
Walter E. A. van Beek
5. Expanding Research for the Expanding International Church
Wilfried Decoo

Part V: Autobiography and Memoir in Mormon Studies
11.“I Still Think of Myself as a Mormon”: The Autobiography of Wayne Booth—A Bold Experiment in Historiography
Levi S. Peterson
12. Art and Artifice: The Role of Memoir in Mormon Identity Formation
Jana Riess
Coda – A Man of His Time and Place: An Appreciation of Armand Mauss and the California Mormons
Claudia Bushman

List of Contributors
Index
Praise and Reviews:
“This is an extraordinarily well-crafted collection of essays. The volume offers both a rearview mirror for where the field has been and a roadmap for where it is and can go. The sections and chapters push beyond the usual suspects providing one new direction after another.”
—Edward J. Blum, coauthor of The Color ofChrist: The Son of God and the Saga of Race in America
“The essays are well written, thoughtful, and represent the best and most forwarding thinking work in Mormon studies. The authors offer up specific Mormon case studies, but from interpretive positions that make the material interesting and relevant to scholars in other fields.”
—Susanna Morrill, author of White Roses on the Floor of Heaven: Mormon Women's Popular Theology, 1880–1920
“Encourages scholars of Mormonism to continue embracing the multiplicity of voices and positions that the Saints themselves occupy, as well as to recognize the advantages that Mormon Studies may gain by embracing the diversity of academic fields, theories, and methods with which peoples, cultures, and ideologies may be approached and studied. This volume will therefore play a significant role in offering directions as well as models that can enrich Mormon Studies in the years to come.”—Nova Religio
“A celebration of religious studies in general and of Mormon studies in particular. The book presents twelve provocative essays written by scholars from multiple disciplines and various parts of the world. ... Reading Directions will help new Mormon studies scholars who want to better grasp the field as they prepare to contribute to it. The book will also be helpful to LDS individuals who are not scholars but who would like an introduction to Mormon scholarship and issues facing the Mormon world.”—BYU Studies Quarterly