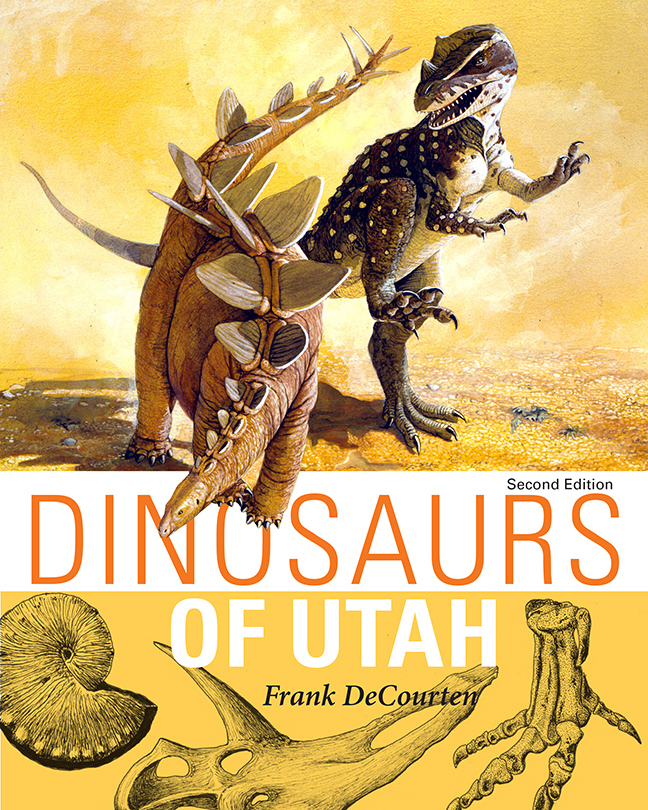 Since the late 1800s, when professional fossil hunters vied with each other to bring the largest and most complete specimens to the museum market, Utah has been one of the most fertile grounds for dinosaur discovery. Because rock from the Mesozoic era covers more than 25,000 square miles in Utah, the state is a natural museum of the great age of dinosaurs. The presence of sites such as Dinosaur National Park and the Cleveland- Lloyd Dinosaur Quarry underline Utah’s ongoing paleontological significance. There are probably more paleontologists residing and working in Utah now than at any time in the past, and the state even has an official dinosaur, the Allosaurus.

Dinosaurs of Utah is an ambitious book bridging the gap between the voluminous technical literature on Utah’s Mesozoic era and the numerous publications that describe dinosaurs at the elementary level. “Utah” dinosaurs are presented here as part of the Mesozoic terrestrial ecosystems that evolved in the Colorado Plateau region and are discussed in the context of the changing landscapes, environments, and biota recorded in the geological record.

More than one hundred of author Frank DeCourten’s meticulous line drawings illustrate fossil remains and various features of dinosaur anatomy, as do five stunning paintings by Carel Brest van Kempen. More than forty color landscape photographs by John Telford and Frank DeCourten show modern geologic contexts in most parts of the state and emphasize the dynamic nature of the region’s geologic history. There is also a series of detailed maps, including several new to this edition, that show the tremendous topographical shifts that occurred within the Mesozoic era from the early Triassic to the late Cretaceous periods, a span of over 175 million years.

This second edition of Dinosaurs of Utah enlivens our understanding of these amazing vanished creatures by explaining them and their world to us. It moves beyond the often superficial representations that have been so prevalent and more accurately portrays the variety of dinosaurs that once roamed the region now known as Utah.

Frank DeCourtenis a professor and chair in the department of earth sciences at Sierra College in Grass Valley, California, and is the author of The Broken Land: Adventures in Great Basin Geology (The University of Utah Press, 2003).
Table of Contents:
List of Illustrations
Preface
Utah Dinosaur Record
1. The Mesozoic World
2. Dawn of the Utah Mesozoic
3. The Early & Middle Jurassic: Time of Transition
4. The Late Jurassic: Golden Age of Sauropods
5. Blood Brothers: Predators of the Late Jurassic
6. The Early Cretaceous: (Un)Missing Links
7. The Late Cretaceous: Beasts of the Bayous
8. The Curtain Falls: Dinosaurs of the North Horn Formation
9. Doing It
Appendix: Classification of Dinosaurs
References
Index

Praise and Reviews:
Praise for the first edition:

“Of books on dinosaurs there are many, but this one aims at a wider target. The book is carefully constructed and is immensely aided by its abundant illustrations.”—Scientific American
“A beautiful book, with lots of truly stunning drawings and photos. You’ll have a hard time putting it down.”—The Times Independent (Moab)
“This ambitious book will satisfy anyone who has ever wondered what things were like when dinosaurs roamed the earth.”—Library Journal
“DeCourten blends an outstanding treatment of field-based geology with a solid introduction to the biology of dinosaurs. This book will be useful to anyone interested in dinosaurs in general and those who seek a clear, up-to-date introduction to paleontology and dinosaur research methods. It can also serve as a textbook for a basic course in dinosaur paleontology. Highly recommended.”—CHOICE