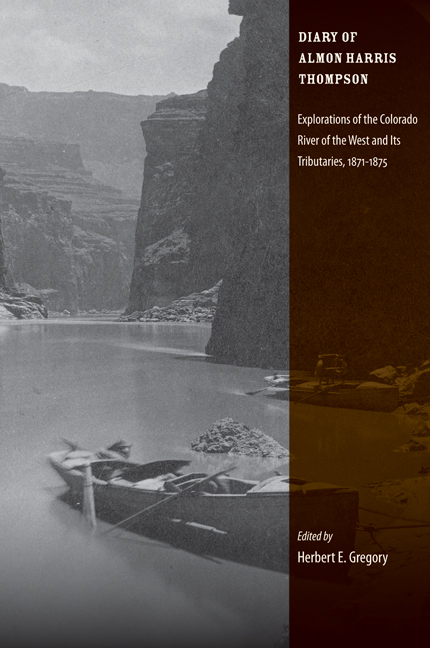 In some respects the most important of the early Colorado River exploration journals, the diaries of Almon Harris Thompson can naturally be divided into three sections: navigation of the Green and Colorado rivers; exploratory traverse from Kanab to the mouth of the Fremont River; and the systematic mapping of central, eastern, and southern Utah and northern Arizona. Thompson’s maps of the Colorado drainage basin, including the first maps of southern Utah and the canyons of the Green and Colorado rivers, place him in the front rank of geographic explorers and they proved invaluable to the later Powell expedition.
Originally published in 1939 as volume seven of the Utah Historical Quarterly, Thompson’s journal is reprinted here for the first time in seventy years. Co-published with the Utah State Historical Society.
Almon Harris Thompson (1839-1906) was brother-in-law to Major Powell and joined the expeditions as chief assistant, geographer, and topographer. Following the expeditions he served as chief geographer for the United States Geological Survey and was a leader in the founding of the National Geographic Society.