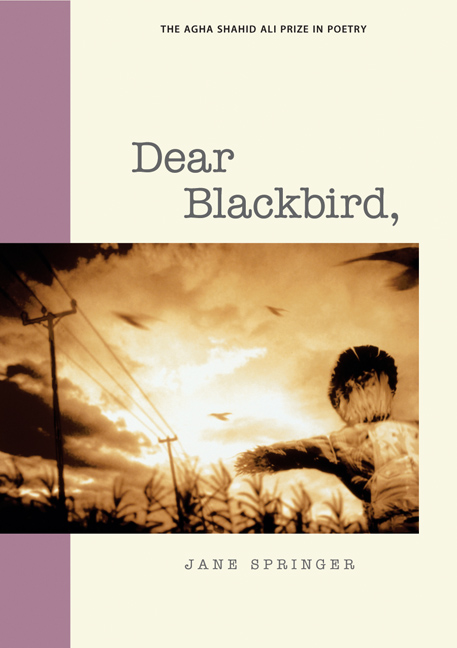 The Agha Shahid Ali Prize in Poetry was inaugurated in 2003 to honor the late poet, a nationally recognized writer and a former professor at the University of Utah, and is sponsored by the University of Utah Press and the University of Utah Department of English.
Dear Blackbird, is the 2006 prize-winning volume selected by this year's judge, J. D. McClatchy, editor of The Yale Review.
Jane Springer grew up in a myriad of small towns in Tennessee, Arkansas, Louisiana, and Kentucky. A doctoral candidate, she currently teaches English in the Creative Writing Program at Florida State University in Tallahassee.
Praise and Reviews:
"Most new poetry I read nowadays seems decorous in its austerities or its embellishments: willed, over-plotted, dry. Not Jane Springer’s. Her work leaps to its tasks with a heady extravagance. Dear Blackbird, is her letter to the world, as eerie as Dickinson’s. Its pages don’t depend on a sequence of neat stanzas but are a surge of incantatory phrases and feelings. The skin of each poem quivers with the mind’s contradictions, the heart’s panic. It is risky, not merely reckless; rapturous, not merely rapacious. Memories spill over fantasies, Southern lore collides with hipster know-how. This book is the most exciting debut in years, and when we remember that 'début' originally meant to score first in a new game, that is just what Springer has done: taken on a new set of terms and struck first, struck gold."
—J. D. McClatchy
"Jane Springer's poetry, anthologized in the pages of Dear Blackbird, ...documents her impressive flair for free verse lyrics that are not restricted to the boundaries of ordinary stanza sequences of formats but are as original in their composition as they are in the content. Lovers of language and appreciators of poetry will enjoy the originality and engagement of Springer's deftly crafted verse."
—The Midwest Book Review