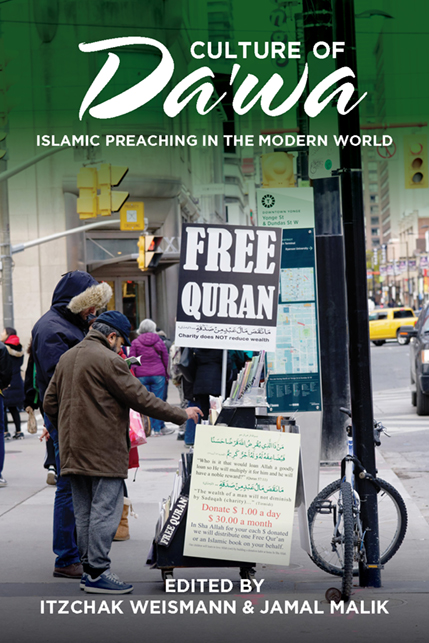 This book provides the first in-depth, wide-scope treatment of da’wa. A term difficult to translate, da’wa covers a semantic field ranging from the call or invitation to Islam, to religious preaching and proselytizing, to the mission and message of Islam. Historically da’wa has been directed outward to nonbelievers, but in modern times it has turned increasingly inward to “straying” Muslims. While the media and many scholars have focused on extremism and militant groups that have raised the banner of jihad, this volume argues that da’wa, not jihad, forms the backbone of modern Islamic politics and religiosity, and that the study of da’wa is essential for understanding contemporary Islamic politics as well as jihadist activity. Contributors represent a variety of approaches and come from a range of academic, religious, and national backgrounds. In these essays, they analyze the major discourses of da’wa, their embodiment in the major Islamic movements of the twentieth century, and their transformation into new forms of activism through the media, the state, and jihadi groups—including al-Qaeda and ISIS—in the twenty-first century.

Itzchak Weismann is associate professor of Islamic studies and former director of the Jewish-Arab Center at the University of Haifa. He has published extensively on modern Islamic thought, Islamic movements, Sufism, and interfaith dialogue.

Jamal Malik is chair of Islamic Studies at the University of Erfurt. He has published widely on Islamic education, religious pluralism, Sufism, and the mobilization of religion.

Table of Contents:Acknowledgments
A Note on Transliteration
Introduction – Itzchak Weismann and Jamal Malik
Part I. Discourses of Daʿwa
1. The Making of the Modern Arab Daʿwa Discursive Field – Itzchak Weismann
2. Discourse(s) of Daʿwa in Postcolonial India – Hilal Ahmed
3. Contemporary Salafi Discourses on Daʿwa from a Transnational Perspective ­­– Nina Wiedl
Part II. Preaching in Movement
4. Ideology, Practice, and Law in the Daʿwa of the Muslim Brothers and Jamaʿat-e Islami – Jamal Malik
5. Nothing Has Changed/Everything Has Changed: Salafi Daʿwa in Egypt from Rashid Rida to the “Arab Spring” – Richard Gauvain
6. Daily Piety Drills for Lay Preachers in South Asia: The Tablighi Jamaʿat and Daʿwat-e Islami – Thomas K. Gugler
Part III: The Global and the Local
8. Contemporary Daʿwa and the State in Southeast Asia – Julia Day Howell
9. Islamization of Christian Lands? Theory and Practice of Daʿwa in Europe – Uriya Shavit
10. Daʿwa in North America: The Past, the Present, and the Future – Elysia Guzik and Larry Poston
11. Global Islam “Made in South Asia”: The Tablighi Jamaʿat and its Universalized Preaching Mission – Dietrich Reetz
Part IV: New Directions
12. Neoliberal Daʿwa: The Egyptian New Preachers (al-du’a al-judud) and the Restructuring of Transnational Religious Preaching and Practice – Aaron Rock-Singer
13. The Daʿi in Contemporary Arab Television Fiction: From “The Foremost of Preachers” to “Our Master” – Jakob Skovgaard-Petersen
14. From Monologue to Dialogue: Wahhabi Daʿwa and Reassessment of the “Other” after 9/11 – Muhammad Al-Atawneh
15. Jihadi Soft Power: The Changing Importance of Daʿwa in Salafi-Jihadi Discourse since the Arab Uprisings – Adam Hoffman
Notes
Bibliography
Contributors
Index
Praise and Reviews:

“A massively complex and well-orchestrated volume. It fulfills the promise of its title, presenting but also critiquing Islamic preaching in the modern world. It has no demons or heroes, but many major figures and influential organizations—including states—that no other authors have combined within one volume.”
—Bruce Lawrence, author of New Faiths, Old Fears: Muslims & Other Asian Immigrants in American Religious Life

“Weismann and Malik have brought a scattered field of work on da'wa into focus. This collection tips the balance of scholarly and public attention from jihad to da'wa. The Culture of Da'wa makes a clear contribution to understanding contemporary Muslim societies both from without and within. Well written, informative, and well placed.”
—Richard C. Martin, author of Islamic Studies: A Twentieth Century Introduction