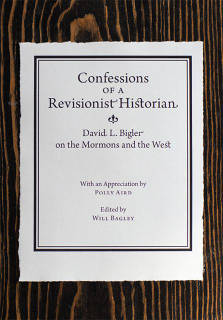 The contrast between Utah’s Native and frontier cultures and its religious roots make the state’s history contested ground. In this collection of his short works, David L. Bigler accepts a historian’s obligation be as strictly honest and as balanced as possible. His crisp, engaging narratives seek to recreate an authentic image of the past that help us comprehend the hopes and aims of all who lived it.

Confessionsof a Revisionist Historian covers the issues and events Bigler considers central to understanding Utah’s colorful history: Millennialism, the march of the Mormon Battalion, the California Gold Rush, the Mormon Kingdom of God, Brigham Young’s Indian policy and the Fort Limhi mission to Oregon Territory, the 1856 Reformation and the origins of the Utah War of 1857, and the conflict’s most controversial acts of violence, the Mountain Meadows Massacre and the Aiken party murders. His analysis incorporates sketches and close studies of overlooked but significant personalities such as Garland Hurt, Nephi Johnson, Benjamin Franklin Cummings, Lewis W. Shurtliff, Benjamin Franklin Ficklin, and John Hawley, plus celebrated and colorful Danites such as Bill Hickman and Porter Rockwell, and tributes to friends and colleagues Harold “Hal” Schindler and Jerald and Sandra Tanner.

In his characteristically good-humored and gentle way, Confessions of a Revisionist Historian includes eighteen articles, essays, presentations, tributes, and a love story that showcase what fellow historian Polly Aird called Mr. Bigler’s “legacy of path-breaking research, honesty, and historical integrity.” This work stands as an enduring tribute to a gifted chronicler’s ability to examine the facts, step outside the box of the venerated interpretation, and evaluate the evidence in a new way, offering original insights into the significant human events that define today’s American West.
David L. Bigler was born in the Great Basin in 1927 and is a veteran of World War II and the Korean War. He retired as director of public affairs for U.S. Steel in 1986 to pursue history full time. He holds an Honorary Doctor of Letters degree from Southern Utah University and is a fellow of the Utah State Historical Society, a charter member and first president of the Utah Westerners, and past president of the Oregon-California Trails Association. His seven books and many articles on early Utah, California, and western history have won awards from Westerners International, the Mormon History Association, and Western Writers of America.
Praise and Reviews:
“Our understanding of Western settlement in the nineteenth century has been changed by David Bigler, and new standard set. Buy this book. It belongs of the shelf of every library, and every Western historian worth his or her salt.”—Overland Journal

A provocative, informative, and challenging source for students of western history in the years ahead.”—Western Historical Quarterly