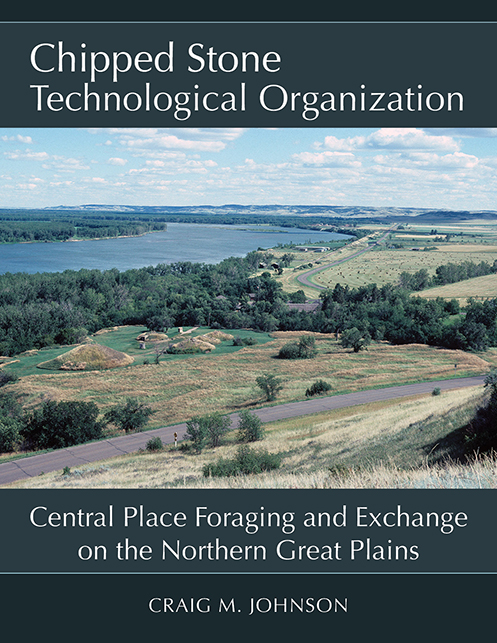 Over a 40-year period, Craig Johnson collected data on chipped stone tools from nearly 200 occupations along the Missouri River in the Dakotas. This book integrates those data with central place foraging theory and exchange models to arrive at broad conclusions supporting archaeological theory. The emphasis is on the last 1,000 years, when the Mandan, Hidatsa, and Arikara farmer-hunters dominated the area, but also looks back some 10,000 years to more nomadic peoples. The long timespan and large number of villages and campsites help define changes through time and over large distances of local and nonlocal tool stone and its manufacture into arrow points, knives, and other tools.

Central place foraging theory, through the field processing model, posits that the farther a source material is from the central living area, the more it will be processed before it is transported back, to avoid hauling heavy, nonusable parts on long trips. Johnson’s data support this theory and demonstrate that this model applies not only to nomadic hunter-gatherers but also to semisedentary farmer-hunters. His results also indicate that toolstone usage creates distinctive spatial patterns along the Missouri River, largely related to village distance from the sources. This is best illustrated with Knife River flint, which gradually declines in popularity downriver from its source in west-central North Dakota but increases in central South Dakota because of exchange.
Craig Johnson worked as a professional archaeologist in Minnesota for nearly three decades, has conducted research on the North American Northern Plains since 1975, and is a participating member in the PaleoCultural Research Group.
Table of Contents:
List of Figures
List of Tables
Acknowledgments

Appendix A: Site Summaries
Appendix B: Frequencies of Chipped Stone Tools
Appendix C: Frequencies of Chipped Stone Flaking Debris
Appendix D: Miscellaneous Tables
Appendix E: Previous Research
References Cited
Index
Praise and Reviews:
“There is no similar study that pulls together flaked stone data from so many sites across such a broad area of the Middle Missouri and spans such a great chunk of time. This work will doubtless serve as a standard reference for archaeologists working on central and northern portions of the Plains.”
—Phil Geib, author of Foragers and Farmers of the Northern Kayenta Region

“Johnson’s book is groundbreaking. Its great scope and theoretically informed data collection and analysis deserve broad recognition, not only for what they contribute to Plains archaeology but also as a general approach that could be successfully applied elsewhere.”
—Mark Mitchell, research director, Paleocultural Research Group, Colorado