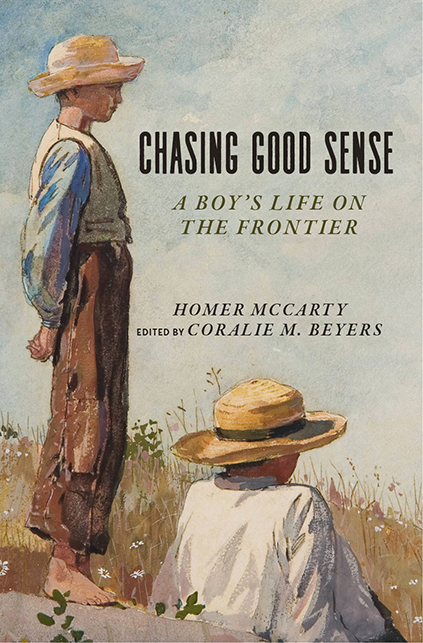 In this creative memoir, Homer McCarty adopts the voice of seven-year-old Buck to recollect his own life growing up in rugged southern Utah Territory in the late 1800s. Although Buck’s reflections are necessarily imprecise—gathered from fragments of memory and then embellished freely—the stories he tells are an honest look at life on the frontier.

In the spirit of Huck Finn, Buck embarks on adventures and mischief with his loyal friend, Earl. Naïve, eager, and inquisitive, he seeks to make sense of his world. McCarty’s portrayal of the period is often humorous, capturing the intimacy of place and family through a young boy’s eyes.

McCarty completed this work in 1948. Had it not been for a series of fortuitous events and the dedication of his granddaughters, including Coralie Beyers, these pages would have been lost. Thanks to her efforts, her grandfather’s lively, entertaining book is now available for readers to relish and enjoy.
Homer McCarty (1868–1954) was a schoolteacher, mineral surveyor, owner of a drugstore and mercantile, and editor of the Sevier Valley Sun. He retired in 1940 and spent the remainder of his years writing.

Coralie McCarty Beyers (1926–2017), granddaughter of Homer McCarty, was an English professor at Utah State University. An author, poet, and gifted artist, she is the editor of Man Meets Grizzly, which recounts her maternal grandfather's stories of bear encounters during the settling of the western frontier.
Table of Contents:
Beginnings
Part One: Figgering Things Out
Summit
Earl and Me
Injuns
Riding the Red Bull Calf
Salt
Campers
Rebecca
What I Learnt from Old Dog Tray
School in Winter
Bitten by a Valentine
Horses and Oxen
Animal Talk
Rabbit Drive
Peddling
Bumblebee Poison
At Dan Harris’s Wheat Stack
Hands, Feet, and My Mouth of Shame
A Wonderful Thing
Part Two: To Pioche and Back
Starting Out
Asa Hanks and the Wild Horses
Freighter Talk
Desert Spring
Alone
The Steep Hill
Pioche
Greenbacks and Idaho Bill
Enuff Desert
Part Three: Hard Lessons
A Heckuva Town
The Thunderstorm
Shoes
The Slippery Slope
Another David
Docking the Devil
Sorrow
Fall Work
Uncle Jim
Brigham Young
St. George
Part Four: Going to the Devil
Back in Summit
’Postate
Everything’s Broke
Goodbye to Summit
Afterword
Praise and Reviews:
“The creation of the sensitive, fumbling, resilient boy-narrator Buck is a remarkable achievement, and his adventures and misadventures have the ring of authenticity. McCarty’s Buck is not a derivative character but a true original. The book makes a significant literary and historical contribution.”
—Edward Geary, author of Goodbye to Poplarhaven: Recollections of a Utah Boyhood
“The author tells a good story while documenting life during a pivotal time in the history of Utah Territory. By telling this story in the voice of a seven- or eight-year-old boy, he shares a unique perspective of pioneer life, one that contributes significantly to the historical record.”
—Lyman Hafen, author of In the Shade of the Cottonwoods: Notes of a Small-Town Boyhood