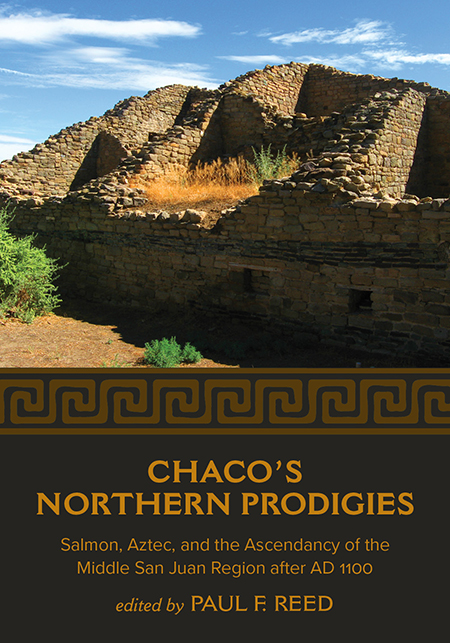 In the late eleventh and early twelfth centuries, the ancient pueblo sites of Aztec and Salmon in the Middle San Juan region rapidly emerged as population and political centers during the closing stages of Chaco’s ascendancy. Some archaeologists have attributed the development of these centers to migration and colonization by people from Chaco Canyon. Others have suggested that the so-called Chacoan 'system' was largely the result of emulation of Chacoan characteristics by local groups in outlying areas. Research over the last five years in the Middle San Juan suggests that both of these processes were operating.
Work by two groups of contributors resulted in this synthetic volume, which interprets thirty-five years of research at Salmon Ruins. Chaco’s Northern Prodigies also puts recent work at Salmon Ruins in the context of Middle San Juan archaeological research. It is a timely synopsis of the archaeology of this region of the Southwest.
Paul F. Reed is a preservation archaeologist with the Tucson based Center for Desert Archaeology. He is the author of The Puebloan Society of Chaco Canyon and the editor of Foundations of Anasazi Culture (University of Utah Press, 2000).
Table of Contents:

Part 1: Introduction
1. Setting the Stage: A Reconsideration of Salmon, Aztec, and the Middle San Juan Region in Chacoan and Post-Chacoan Puebloan History

Part 3: Material Culture Analyses: Salmon Pueblo
4. Subsistence and Plant Use During the Chacoan and Secondary Occupations at Salmon Ruins
5. Parasite Pathoecology of Salmon Pueblo and Other Chacoan Great Houses: The Healthiest and Wormiest Ancestral Puebloans
6. Animal Bone from Salmon Ruins and Other Great Houses: Faunal Exploitation in the Chaco World
7. Sighting Along the Grain: Differential Structural Wood Use at the Salmon Ruin
8. Human Remains Recovered from the Tower Kiva Salmon Ruins

Part 6: Synthetic Views of the Middle San Juan Region
14. Chacoan Society: The View from Salmon Ruins
15. The Position of Salmon Ruins in the Middle San Juan, AD 1000–1300: A Perspective from Ceramic Design Structure
16. The La Plata, the Totah, and the Chaco: Variations on a Theme
17. Sacred Landscapes: The Chaco-Totah Connection

"This book is a timely synopsis of the archaeology of the Middle San Juan region. All of the contributors are experts in their particular subject matter and bring this expertise to bear in some unique and at times, exceptional ways." —Charles Riggs, Fort Lewis College

"Offers a welcome and long overdue perspective on some of those people who lived north of Chaco in the San Juan River system and experienced a historical development nearly as astonishing."—New Mexico Historical Review

"Offers a major contribution to the archaeology of the northern American Southwest. The book's strength is that each chapter is jam-packed with data."—Journal of Field Archaeology

"A well-contructed compendium of archaeological syntheses. Reflect[s] individualized perspectives from inside and outside the study area that take contrasting positions on many of the relevant issues of chronology, environment, and cultural traditions and influences."—Journal of Archaeological Science

"Well organized, illustrated, data and reference rich. Most importantly, it provides a balanced spectrum of views bringing together both legacy and recent research to address a series of substantive issues."—Journal of Archaeological Science