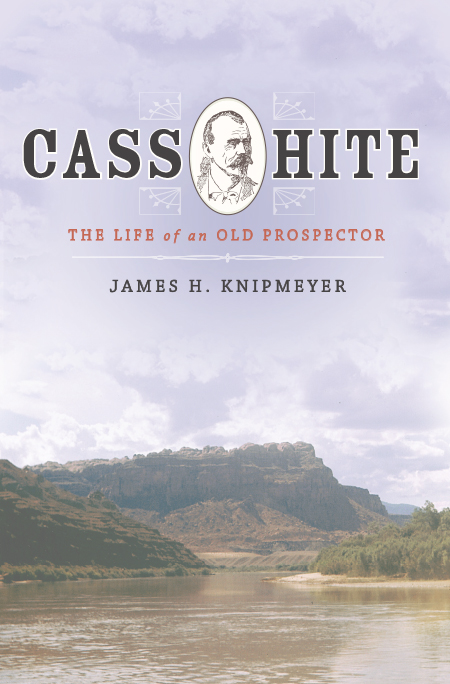 In the late 1800s and early 1900s, Cass Hite was a well-known prospector in the Glen Canyon area of southern Utah. He lived as a recluse yet knew most of the river runners, trekkers, cowboys, and Native Americans that passed through the region. He often wrote to newspapers and was in turn sought out by reporters for his vibrant comments. Hite followed the trail of gold and silver to destinations throughout the West—a time recounted in a memoir he penned in rhyming verse. After his death, his name remained prominent in the region. The tiny hamlet of Hite was an important ferry crossing of the Colorado River (since replaced by a bridge), and the nearby Hite Marina kept the name in the public eye for thousands of boaters.
Despite this notoriety, no one has written a full-length, scholarly account of Hite’s life. This biography fills that void, detailing Hite’s story from his birth in central Illinois in 1845 to his death in Glen Canyon in 1914. It corrects some of the long-accepted stories about Hite and puts others in their proper perspective, while revealing new information. Scores of photographs and excerpts from Hite’s own writing further illuminate this colorful prospector’s life.
Missouri native James Knipmeyer has been hiking and backpacking in southern Utah and northern Arizona for over fifty years and has published numerous articles about the region’s history. His books include Butch Cassidy: Historic Inscriptions of the Colorado Plateau, In Search of a Lost Race: The Illustrated Exploring Expedition of 1892, and Joe Duckett: The Hermit of Montezuma Canyon.
Praise and Reviews:
“Mr. Knipmeyer’s biography of Cass Hite is a well-researched and clearly written monograph that will add to the story of one of the better known characters in Colorado River history. This book will help scholars and fans of the Colorado River understand better how gold mining functioned there.”
—James M. Aton, author of John Wesley Powell: His Life and Legacy

“Knipmeyer consults newspapers, autobiographical accounts, and a range of manuscripts to unearth the legendary life of ol' Cass Hite. His engaging, factual biogrpahy will acquaint historians and interested readers with a colorful western figure.”
—Jedediah Rogers, author of Roads in the Wilderness, and co-managing editor of the Utah Historical Quarterly

"Knipmeyer has done a superb job weaving the threads of Cass Hite’s life into a well-researched biography valuable to all scholars and students of the Southwest…. Only a devoted desert rat like Knipmeyer, who knows the Colorado Plateau like the back of his hand, could have had the dedication to write this definitive biography.”—Durango Herald